Into the Spiderverse - Review 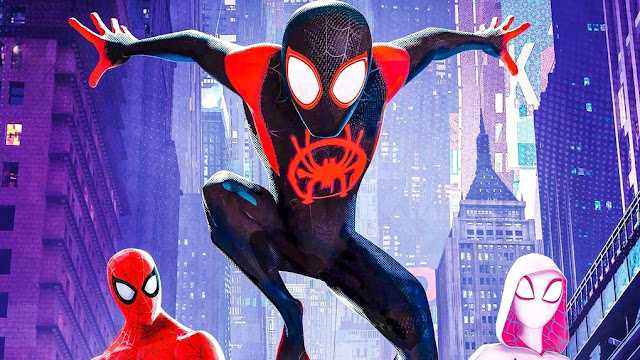 It's taken me over a year to get around to watching Into the Spiderverse, I've had it on DVD for a while but its just sat on my shelf for a while going unwatched. However, recently I finally found time to sit down and give it a go and I can safely say that it lived up to the hype and excitement surrounding its initial release and then some.

So often we've seen movies try to condense decades' worth of storylines into one cohesive movie plot. Sometimes it works and sometimes it doesn't, especially if they have to change or tweak the origins to some of the most beloved of superheroes. Into the Spiderverse goes the intelligent route and introduces us to Miles Morales, a character that was relatively unheard of outside of comic book circles and that allows Marvel and Sony to play around with his origins in a pleasingly enough way that it won't ruin the character for anyone who is a fan of his comic book series.

I've read a few issues of Miles Morales as Spider-Man but never really got into them all that much but that doesn't matter here as the film spends much of the first act giving us his backstory from trying to get used to the private school he won a scholarship to, navigating his life with his protective cop-father and his mother and his relationship with his uncle which is tainted in a shocking reveal at the half-way point. And then he gets bitten by a radioactive spider, which gives him superpowers. Those powers quickly see to it that he is put in the way of Peter Parker's Spider-Man but just when it seems Peter will be mentoring the young-Spider, he is killed in a battle with Kingpin, voiced by Liev Schreiber and Miles, voiced by Shameik Moore quickly finds himself thrown into a battle with the fate entire multiverse at stake thanks to Kingpin's meddling and his dimension canon. 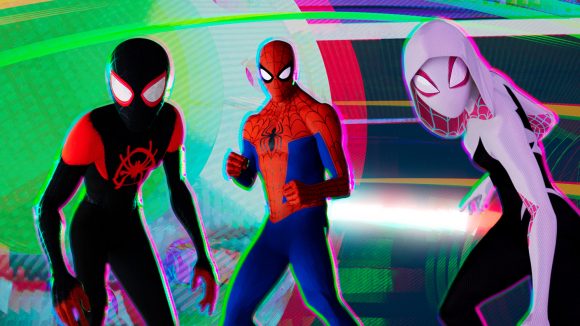 Kingpin's plans do allow for another version of Peter Parker to come into the picture, this time, a slightly larger, depressed version thanks to his failed marriage to Mary Jane Watson. This version of Peter, voiced by Jake Johnson works brilliantly as not only comic relief but also as a mentor, albeit a reluctant one to Miles. It isn't long though before the pair are joined by different Spider-Men and Women, including Spider-Gwen and Spider-Man Noir amongst others. For long-time fans, these different versions of Spider-Man will be meet with fanish glee and for casual viewers the bizarreness of these characters will be equally as exciting.

With a brilliant script that will please both adult and child viewers, the animation on offer is incredible. The whole piece feels like a pop-art painting and while sometimes, the shifts in animation does threaten to induce an epileptic fit, most of the time, it all holds together, and the animators make sure to shift styles depending on the different Spider-Men, from black-and-white to Anime, nothing fazes the film and style, which reminded me of films like Bolt and Despicable Me, worked brilliantly here and seemed perfectly suited to a Spider-Man movie. 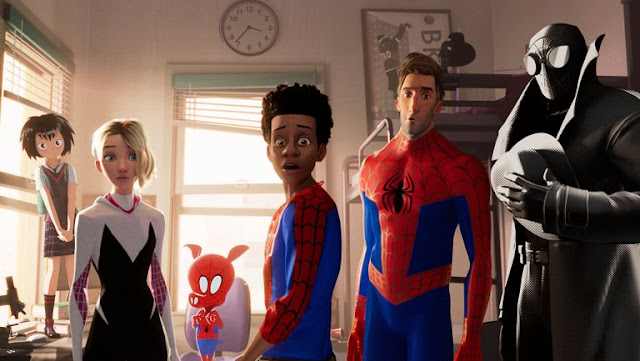 For people who are familiar with the writing style of the early Miles Morale's appearances, most notably in Brian Michael-Bendis' run on Ultimate Spider-Man, the scripters Rodney Rothman and Phil Lord give the movie a similar feeling to those comic books. And it helps that Bendis was on the job as an executive producer to keep things in line with the character he originally created almost a decade ago. The script is witty enough to keep the children and parents happy, while older children and adults will most probably enjoy the surprisingly complex storyline and some more adult-orientated jokes. And there are cameos and in jokes aplenty for the hardcore comic book fans like myself with appearances from Lady Octopus, Tombstone, Spider-Ham amongst some of the more obscure Spider-Man characters. And there are some humorous jabs at the Toby Maguire stint in the role in the early 2000s.

Where the movie seems to falter is in some of its more emotional beats. They don't fall completely flat but with all the characters involved and the complexities of the plot, there seems to be little time to linger on the sadder moments. And that isn't necessary a bad thing, Peter Parker became Spider-Man because of his inability to stop a thief who would go on to kill his Uncle Ben whereas Miles became Spider-Man to carry on Peter's legacy after he died at the hands of the Green Goblin and I think it was the right move for the script-writers to focus on that, we don't need another Spider-Man movie with the death of Uncle Ben! And in carrying on Peter's legacy, Miles instantly feels endearing, thanks in great part to the voice acting from Moore, and the fact that the movie doesn't try to juggle being a teenager with the responsibilities of a superhero.

Into the Spiderverse is just one in a long-line of movies surrounding the character of Spider-Man, but it instantly feels like something completely new. Like many of the new characters in the comics who have taken up the mantle of old superheroes, this is a movie that celebrates that kind of legacy while keeping things refreshingly new and diverse without hitting you over the head with it. It's intelligent and fun and a film that's light-hearted but does actually have some big stakes. So even if this is the seventh Spider-Man movie in 16 years, you'd think that things were getting a bit old-hat by now, but Into the Spiderverse reinvigorates the Spider-Man mythos and shows us that there still plenty of exciting and great stories to yet to be told.