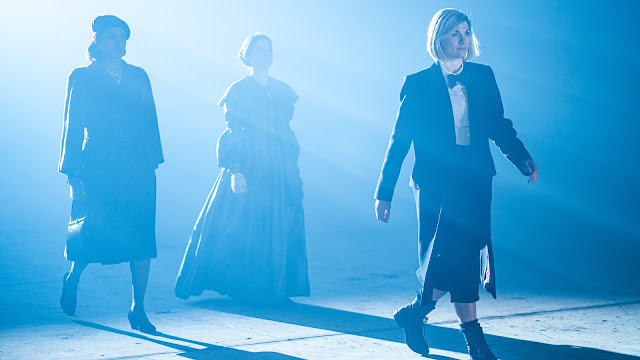 Following on from the explosive cliffhangers from the opening episode, Series 11 continues to display both the strength's and weaknesses of Chibnall's era so far. It's full of interesting ideas, notions and concepts, but its so overstuffed that he once again, seems to bite off more than he can chew and like most of all Chibnall's entrances into the Doctor Who world, this story suffers from a serious anti-climax, despite some really high stakes. And while Part Two exceeded my expectations from Part One, it did in other ways, fall short of the bar that Part One had raised.

But there were two really brilliant things about Part Two. With Graham, Yaz and Ryan continuing the spy-theme from the previous episode, with laser cufflinks and shoes used to comedic effect, one of the best things of this episode was putting characters out of their depth. Doctor Who has always done this but it excels when characters are put down in different time zones, in this case a woman from 1834 confronting the horrors of WW2 first hand, in a plot that felt very relevant in todays political climate.

The second brilliant thing here was the use of time-travel. With Season 11 Chibnall used the historical stories to educational effect. Here, while it still has the educational elements, with its celebrations of Ada Lovelace, who was a 19th century mathematician and basically created the first computer and Noor Inayat Khan, the first female wireless operator to be dropped behind enemy lines. However what really made this episode a great watch was that it didn't just use the Doctor and her friends as observers in their lives, but included them in the story, using their skills to help defeat the Master and thwart the evil Kasaavins. 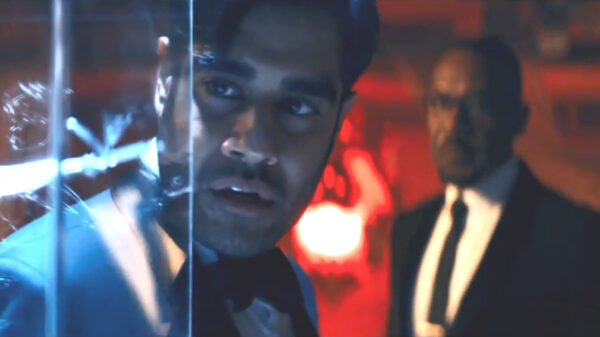 In a clever twist that was probably done to avoid confusing the viewers, the Kasaavin's map of multiple Earth's actually turned out to be a map of different time zones. As their own villainous plans don't match up to the Master's and they've put themselves into the development of the computer, making taking over the Earth a lot easier in the present day. But like most would-be-great companions, both Ada and Noor, throw themselves into the action brilliantly, even though they don't entirely understand what is going on but now, they've joined a group of a few people who the Doctor has met who would have been brilliant companions had the showrunner decided to make them ones.

For me, it was the Doctor, Ada and Noor plot line that was the highlight of the episode, really standing out against the slightly duller plot with Graham, Yaz, Ryan and the evil Daniel Barton. But the Doctor, Ada and Noor plot gets really good when the Master starts hunting them down. First he attacks the Royal Adelaide Gallery of Practical Science where Ada is demonstrating some inventions and then Nazi-Occupied-Paris where Noor is working for the Allies.

Sacha Dhawan's Master is even more impressive in this outing than in his reveal at the end of the previous episode as he balances the Master's craziness with a quiet menace. And despite her OTT quirkiness, Jodie Whittaker's Thirteenth Doctor is one of the more human Doctor's we've had in a while and the pair work well together as a pair. They both begin to develop an excellent chemistry as the episode goes on, easily developing the relationship between the two frenemies.

But the inclusion of the Master does raise a few continuity questions. After Season 11 which had virtually no connections to any other series of the show, the Spyfall outing does begin to weave big questions from other eras of the show into the workings of Whittaker's tenure. But they seem to be questions that Chibnall doesn't entirely know how to answer. We don't get an answer as to when Dhawan's Master comes in that character's timeline as it was believed that Missy was the last incarnation after John Simm's crazier incarnation of the same role, seemingly delivered her a fatal blow. And that isn't the first time we've seen Time Lords die beyond the ability to regenerate. But if he is after Missy, then it makes the great arc Michelle Gomez's incarnation had during Stephen Moffat's time as showrunner. 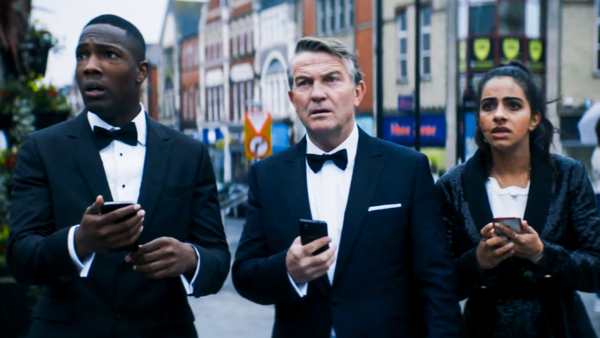 These are questions that will confuse both new and old viewers. Series 11 was designed as a series that newbies could get into without any problem. But these are also questions which will likely confuse old-time-viewers just as much, even though for me, I'm willing to just go with it as the Master has a tendency to just turn up. But with her having spent so much time trying to rehabilitate Missy, wouldn't the Doctor want to know what went wrong?

The end of the episode delivers one possible answer with the seeming destruction of Gallifrey, once again, and that at some point, the Master uncovered a secret so terrible he decided to exact revenge upon them all. And I suppose that can read as the fall of the character of Missy but with much of Russell T. Davies era being centred around the Time War and the first destruction of Gallifrey and Moffat's era being about Gallifrey being restored to it's former glory, does a second destruction feel either necessary or a little bit too early to be telling that type of story again.

My initial reaction to the return of Gallifrey in Moffat's era wasn't a great one, simply because I wasn't the biggest fan of the 50th anniversary story, The Day of the Doctor, a story which could have been and done so much more, I'm not against it returning here, though there is a risk of turning Gallifrey into a bit of a joke about destruction and resurrection. But I'm particularly intrigued to see where Chibnall takes this story, particularly the inclusion of the mysterious, 'Timeless Child', that we got our first hint at in the previous series. And anything that gives Whittaker a chance to develop a more emotional and 'Time-Lord rage' about her incarnation is all good in my book.

Surprisingly though, what drags the episode down is the subplot with Graham, Ryan, Yaz and Daniel Barton. Barton has to go down in the history of the show as one of the worst human villains the show has ever produced. But its an idea that initially seemed promising with Graham, Ryan and Yaz, stuck on their own without the Doctor, facing off against aliens and with so many characters in the TARDIS, its rare to see these three companions as a trio. It was nice though to see them questioning how much they really know about the Doctor and should they really put too much trust in her and it does pose in an interesting future reckoning for this TARDIS team.

But with the Barton plot putting some needed emphasis on how much we've come to rely on technology as a society and how now the big corporations and indeed, the machines themselves know about us, have we created our own downfall, the actual wrapping up of this story was dismal with Barton simply walking away, with no explanation given to how he is only 93% human. Something tells me this isn't the last we've seen from Barton but thanks to Lenny Henry's somewhat lacklustre performance I'm not too fussed about never seeing him again.

And one of the most exciting things about Doctor Who is that absolutely anything can happen and Spyfall continues that trend. I've a feeling after the mixed reaction to the previous series, that Chibnall has had no choice but to buck his ideas up a little bit and maybe that's for the best because Spyfall has been one of the best episodes to have ever come from Chris Chibnall as a writer but he still seems to have trouble sticking the landing and given the plot-line he has created, lets hope the resolution doesn't include the villain simply walking away...