I Still Know follows the established rules for action/horror sequels, higher body count, weirder deaths and a stronger killer. And this film follows the original by giving us a slightly campier outing, which either to is appeal or detriment depending on your outlook. In the first 35 minutes, we've already been introduced to Jack Black's terrible take on someone from Jamaica, a Nightmare on Elm Street nightmare sequence, and we see the Fisherman killer in the middle of a nightclub. I still haven't worked out how he managed to programme the words 'I Still Know' into the karaoke machine! But in all honesty, the best sequels are often always campy!

Replacing Sarah Michelle Geller in this film is the iconic duo of the 90s, Brandy and Mekhi Phifer as the couple duo and while sequels rarely give us good characters, even films like Scream 2 struggle with that aspect, what this movie does really well is delve into the traumatic aftereffects for the final girl, Julie. While Sydney in Scream 2 seemed to have moved past the events of the first movie, Julie is still haunted by it and it is nice to see her come to terms with what happened and take her own sort of revenge on the killer over the course of this outing. But as the ending shows us, she still doesn't get too much of a happy ending as her ideal life with Freddie Prince Jr is ripped away from her. 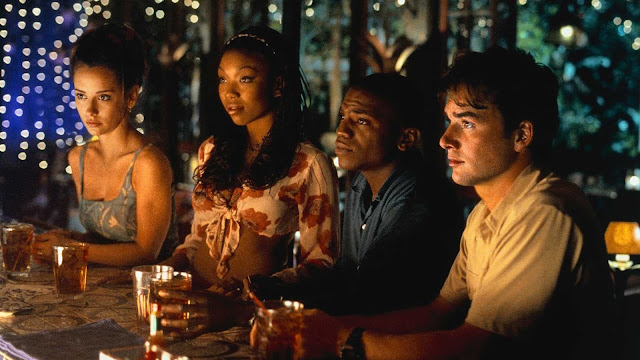 The movie also sees the action move away from the quiet coastal town in the first movie to a tropical holiday on a Jamaican island about to be set upon by a shocking storm. What seems like a beautiful backdrop at the beginning quickly spells doom for most of the characters we are introduced too and it helps set the two movies apart from each other in an enjoyable enough way. Also tonally the movie has shifted. I Know felt tight and claustrophobic, thanks to its close location shooting and tight interior shots, it also felt like the killer was never too far away. I Still Know on the other hand feels wide and expansive, but those open spaces are still a playground for the Fisherman killer. I would be interested to know if he wore that costume on the plane-journey over to the island! But this movie feels like we're looking down on the characters running through a maze and then fighting back when they realise what's going on. It's a interesting way of experiencing a film and surprisingly enjoyable.

Julie also rises above some of the other final girls by going from annoying like she was in the first one to a hard-hitting character who goes from being scared to being mad and that is also an interesting look for a final-girl. And Jennifer Love Hewitt rises to the challenge brilliantly.

For the most part, I Still Know What You Did Last Summer is an over-the-top affair but a movie that's a lot of fun with no real high stakes. I was impressed by the set design and some of the set-pieces. It looked like great fun to film and while it might not stand up to the original, it works as an enjoyable enough, if mindless sequel.