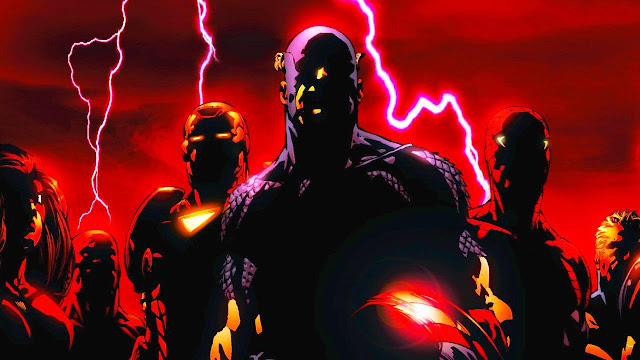 When it was first rolled out in 2004, there were fans who seemed to resent the line up for the New Avengers. For many people, the big appeal of the Avengers was in seeing some of the less powerful characters. Like with the Justice League, people wanted to see what Hercules, Black Widow and Hawkeye were up too. Iron Man, Wolverine, Spider-Man and Captain America were always popular enough to hold their own titles.

The New Avengers here are made up of mainstays, Captain America, Iron Man as well as newcomers Wolverine, Spider-Man, Luke Cage, Spider-Woman and with Thor having fallen into a slumber over in his title, The Sentry was the stand-in for him, the closest character Marvel had to Superman at the time.

The first half of this book is great, focusing on a villain breakout of the Raft, the superhuman prison. Thanks to Electro, we get quite a few nice cameos and for Carnage, a rather swift exit! More importantly though, within two issues author, Brian Michael Bendis gives us an introduction on a Hollywood scale and a reason for there to be new-Avengers.

The second half of the book is a little less successful. It sees the team chasing Sauron to the Savage Land and the usual Tarzan antics ensue. We get some nice funny bits but nothing really special, though there are some promises of things to come. However one can't help but feel that by the time the book comes to an end, things had become a little complacent already.