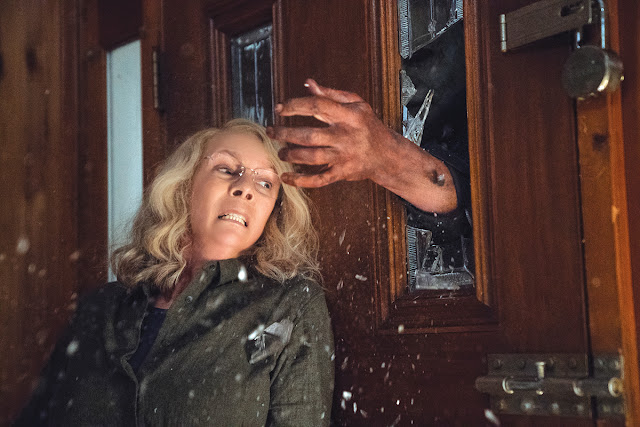 It should come to no surprise to anyone that the latest Halloween, the remake/continuation/finale of the original 1979 movie, sees Michael Myers returning home, to Haddonfield on Halloween-night. Of course, when any escaped lunatic can, he should take the opportunity to visit family! Myers is a creature of habit and so, it seems, is the Halloween franchise, which at every opportunity has returned to the same road on the same night to repeat the same things, over and over again. In fact, one might have thought that it should be declared a night of martial law in Haddonfield. Just how many horny teenagers have to die, before the police can get there in time? They should just ban trick-or-treating, William Shatner masks and put an armed police officer on every available street corner!

We are supposed to look upon 2018's Halloween as more than just another inferior sequel. This is supposed to be the sequel, the one that the original 1979 movie was supposed to receive but never got. It has even been made by an experienced director in the form of David Gordon-Green, someone who has recently made something of a genre-jump, following his muse wherever it seems to take him. And Jamie-Lee Curtis has returned, once again playing Laurie Strode, the original final girl, whose life has been haunted by the horrors of October 31st 1979.

However, even with all its promising pedigree, this new take on the original still only manages to come across as an inferior sequel, albeit one that has fun referencing the original in a nice little homage.

The problems begin when it becomes clear that the dramatic angle still hasn't changed. Halloween H20 did something similar twenty-years ago when it showed an older Laurie Strode struggling to survive in a re-match with Myers after a marriage fell apart. However, the idea here is that every single instalment in the franchise didn't happen apart from the first. The producers instead present Laurie as a battle-hardened survivor who has waited all her life for the final rematch with Myers. Her decades of preparation have forced a wedge between her and her daughter, Karen who has a daughter of her own, Allyson, who coincidently, is the same age as Laurie was all that time ago in 1979.

As fate would have it, the powers-that-be are moving Michael from one asylum to another on the anniversary of his murder-spree. And when the prison bus crashes, the filmmakers waste not time in rehashing the classics. He walks around in a crowd of costumed members of public. Is being hunted down in a not-too-hot-pursuit by a policeman and psychiatrist, and bringing teenagers fun to a screaming end when he cuts his through plenty of them. I suppose there is supposed to be a sense of being pulled back in time, just like Laurie and this would probably work had not every single instalment beforehand done virtually the same thing. Once again we're watching a cover but this is one that knows the words but not the music. And on the topic of music, the actual music is fantastic. Performed by John Carpenter himself, it is eerie, reminiscent of the original while it also manages to do something completely original, allowing the movie to have a original feel, even if it is in musical form only.

Certainly the most accomplished director to ever tackle a Halloween movie, Green does have some fun with camera angles, allowing us to feel like this is another Carpenter directed movie. There is a really great shot that sees Michael walking up to a window, looses him when he walks to the entrance round the side of the house and then shows us killing the occupant and drawing the curtains, all done in one continuous shot. What doesn't happen though is that he doesn't give us the same sense of unease that Carpenter did when he carefully set up the perfect little suburbia that he continued to tear down when the original movie reached its crescendo. Instead, the direction feels more akin to the recent Jurassic Park movies, inspiring plenty of recognition but not much originality. But what really doesn't help the proceedings is the constant comedic asides and it is something that only works to undercut any real scares there might have been otherwise.

However, there is some real appeal in seeing Curtis back in her original Scream-Queen role that launched her career. What is nice is that she gets to offer a brand-new-take on her character, playing the older Laurie as a tougher, un-sentimentalist who borders who has possibly grown a little mad over the years because of her obsession and preparations. And there is some great drama there from Curtis as she shows us what if feels like for our loved ones when we experience something so traumatic that it turns us into fighters, even if it affects everyone around us. This might have been all the more effective however had the producers spent a little more time showing us how this changed her life, much like how Carpenter spent a lot of time showing us the normality of her teenage life before he turned it upside down. Instead though the directors seem more interested in showing us how three generations of Strode's team-up at the end to take down Myers one final time.

At the end of the day though, we've all been down this particular road before. The end result from Green feels just the same as H20 which, despite being one of the instalments we have to forget, might be a better finale for the Halloween franchise than this one. H20 gave us reasons to really care about Laurie, a post-divorce romance and even sent Michael off to kill characters away from his usual stomping ground, breaking the cycle of repetition that his haunted this franchise from its first entry.

This Halloween however, can't quite help but the leave the final-door open just a crack, teasing a possible return. For not though, the inhabitants of Haddonfield had better learn to keep their doors closed and locked, Myers might still be on the prowl...