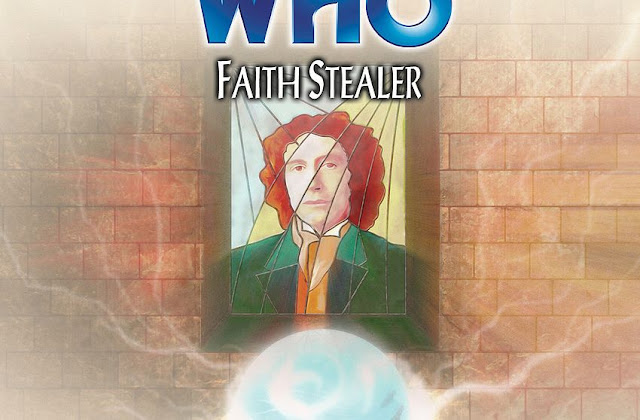 The fourth series of audio adventures for the Eighth Doctor kicked off in 2004 with this largely stand-alone story, Faith Stealer, from new author, Graham Duff. It also manages to settle things down after a shaky third series.

Even to this day, Doctor Who has touched on many different aspects of religion, but while Faith Stealer, doesn't presume to go into any kind of debate about the merits and foundation of religion and faith, the essence of it is as strong here as it has ever been. The Multihaven is a fascinating setting for a story, a space where any religion can exist peacefully while each religion's followers compete for more members. The overseeing powers, the Bordinian encourages diversity in faiths, and it is very surprising and humbling to hear so many different religions existing alongside one-another without fighting. Some of these religions are played for laughs, in particular the Church of Whoops, who celebrate chaos for its own sake. Each religion that the Doctor and his friends come across has some interesting lines and memorable moments and that holds true when they have to gain access to each religion saying that the Doctor and Charley belong to the Church of Tourism and they worship C'Rizz after a morning cup-of-tea.

But things aren't all fun-and-games as slowly, the deeper aspects of these religions are revealed. Growing with the demand that people convert to one religion, something completely alien is coming to the Multihaven. As members of other faiths and religions flee persecution, the Doctor realises that one of the heads of Lucidvision faith is a complete embodiment of the religion itself. There is of course a deeper conversation that the script wisely steers clear off about conversion and what it takes to convert someone to one-particular religion. But author Graham Duff wisely chooses not to explore this any further than necessary.

Looking past the strong plot, Duff is also good at the characterisations. Early on Charley comments that she and the Doctor don't really know much about C'Rizz and after he suffers a few flashbacks to when he was forced to kill his wife L'yda, he opens up about his own faith and religion concerning the Church of the Foundation, an element of which we had in his first story. There is a suggestion later on in this story that C'Rizz is full of remorse for his time with the Church of the Foundation which then opens his mind to be used by the strange Miraclulite. But the uncertainly about his character for the listener means that he is still strange and offers us some intense moments.

The Doctor is on fine form here too, keeping his spirits up after apparently seeing the TARDIS being destroyed and it is him who works out what is really happening with those people who have been converted, they are sleep-deprived thanks to their proximity to the Miraclulite.

Faith Stealer is another strong entry into the Divergence arc, but it works particularly well because it can be listened too largely, as a standalone adventure...