Doctor Who: Arrangements for War - Review 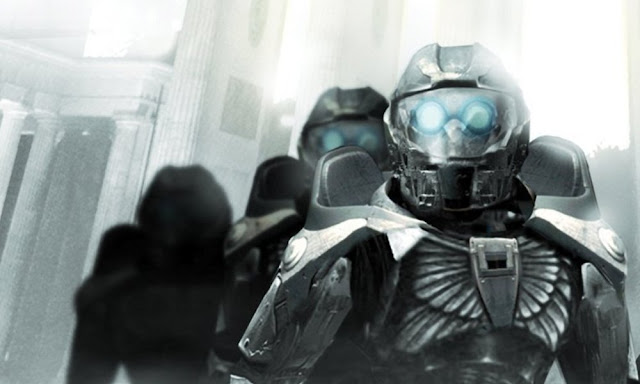 Recently I picked up a substantial amount of Big Finish audios in a warehouse sale. Dipping back into their catalogue, I came to  Arrangements for War, the next audio I had to listen too. Picking straight up from 2003's Project: Lazarus and the horrible events that occur in it, seeing the Doctor and Evelyn have to watch their friend, Cassie murdered by the psychotic Nimrod, Lazarus ended with Evelyn locking herself in her room and refusing to come out.

Arrangements for War picks up almost straight after that with the Doctor trying to convince Evelyn that she needs a relaxing trip to the Eye of Orion so she can recover. However, Evelyn doesn't want fancy vistas and so the Doctor and the TARDIS take her to the planet Vilag, which has just signed a peace treaty meaning there is no danger of the Doctor and Evelyn finding themselves in serious trouble.

If there is one word that would perfectly describe this audio, its 'lovely'. Arrangements for War is a lovely audio, with some lovely performances, a lovely script and lovely sound design. What makes it stand out is that is very character based and focused and it sees Colin Baker and Maggie Stables, quite possibly, at their absolute best. Of course things don't stay simple and the Doctor soon finds himself aiding a young man in getting the love of his life back. However, that soon results in a major political incident which sees the Doctor and Evelyn separated from each other and the TARDIS. Aside from that, there isn't a lot of action in this tale and I'm not sure it really needs it. The Doctor finds himself playing advisor to Princess Krisztina who is trying to have a secret relationship with Corporal Reid. And Evelyn has slowly fallen for Governor Rossiter who is the leader of a neutral country in the overall conflict.

While Arrangements is light on the action, that isn't the same story for the plot with the politics of the situations changing with the end of each episode. Author, Paul Sutton keeps things feeling fresh by having a change of time between each episode and fills in the gaps by giving us some news reports from the Vilag news stations, this also manages to give the story a large emotional canvas to draw from and on and it also gives the story enough time to develop the relationships between the Doctor and Krisztina, the Doctor and Reid, Krisztina and Reid and Evelyn and Rossiter. And even though they spend much of the story apart, it also adds to the development of Evelyn and the Doctor.

The aftereffects of Project: Lazarus drives a lot of the story here, with the Doctor having to discover that not everyone can bounce back from a tragedy and Evelyn having to learn to process the tragedies she has witnessed, especially with the fatal heart condition that she discovered she had in the previous audio. The Doctor's relationship with the young lovers is touching and well done and it is nice to see the Doctor being a mentor and a friend. And Evelyn gets a number of touching scenes with Rossiter where she deals with everything she has been through.

If there are any complaints to be made about this story it is that the Doctor is powerless through a couple of key-scenes, which is strange because he is the incarnation who can find a way even when no one else can. But that is a small quibble considering how enjoyable I found this one.

I now find it difficult to understand how people can skip over Arrangements for War and I'm really glad I've gone back to listen to it. Despite coming out from Big Finish in 2004, it still stands up as one of the strongest Big Finish releases of all time, everything about it is great. Lovely.