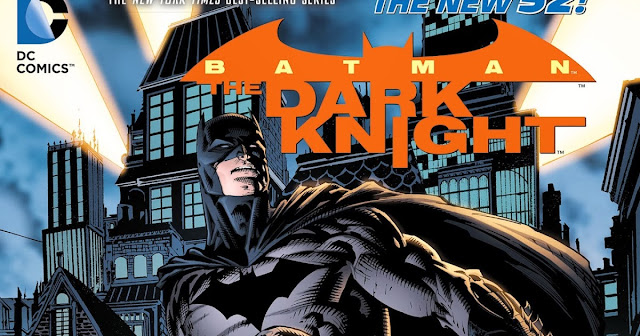 Gotham's children are going missing and it is clear that Scarecrow is to blame. Batman must confront his greatest fears in the book from Gregg Hurwitz and David Finch, as he brings down a gorier version of Scarecrow who drips blood from his stitched-up mouth and who wields a new version of a fear toxin.

With the previous collection from this range, The Dark Knight proving to be a case of style over substance, Finch had written that story around what he would have most fun drawing. In the previous volume we see almost everyone Batman has ever met, The Justice League, a playboy bunny, a hulked out Two-Face and Deathstroke chopping Batman's plane in half. The OTT imagery was fun to look at but the story made absolutely no sense. It didn't take long before it was announced that half-way through that run of stories that Finch would be focusing on art and a new writer was coming in.

Cycle of Violence, sees new writer, Gregg Hurwitz bringing a far-too-long storyline, which follows another piece of his work a little too closely. Penguin: Pain and Prejudice was a great look at the character that is broken up by flashbacks to his childhood that show the kind of trauma that he had gone through and had to learn to deal with. Hurwitz does exactly the same with Scarecrow here.

With a grittier tone that will please some readers, the emphasis on gore will bore long-term Batman fans and it also doesn't offer us anything new on the Batman/Scarecrow dynamic. As well as there being a brand new fear-toxin, Batman's hallucinations involve him falling down the well, as he did when he was young, as well as the pearls of his mother's necklace, the night his parents were shot down. The whole thing has a very 'been-there-done-that' feel to it and what new aspects there are to the story don't really work well as a result.

These new aspects include the Scarecrow having sewn his mouth shut and drooling blood everywhere which gets a little excessive at times and its something that, as I continue to read the newer Batman books, I hope they don't stick with, like the Joker having no face. The other negative would be the whole origin of the Scarecrow which unfortunately forms the heart of this book. I found the revelations that this heralded only pushed the fear back a generation and we see Jonathan Crane's father obsession with fear and the experiments he performed on his son which meant that Jonathan would one day follow the same cycle of violence.

But the book should have asked what the problem was his father, how did he get like that and are we expected to believe that this obsession with fear began with Jonathan's grandfather and continue down the family line. And if that was what Jonathan went through in his childhood then why the hell does he still have an affinity with fear and phobias?

But its not all bad as the book does have a creeping sense of unease, we've got a nice subplot with Bruce Wayne and his son Damian and some nice action sequences, excluding the final set-piece, which really hit hard and well drawn. And Bruce has a new love interest who you may or may not like. It has to be said though that she is the only girl he's dated in the New 52 run of stories who actually has something of a personality.

And it is unfortunate that even though the quality of the writing improved thanks to Hurwitz, the main attraction of this book is the artwork. But you'll notice this time that things look slightly different. I think with the inclusion of different inker, things look a little more crude, which adds to the sense of unease that this book has. With Scarecrow's new look being divisive, Batman looks great and Finch makes great use of his shadows.

And this book also collects the special zero-issue which saw the younger Bruce Wayne confronting Joe Chill, the man who murdered his parents. It is a great idea but one that is poorly executed.

Overall though Cycle of Violence is nothing we haven't already seen from Batman books, but with a lot more blood and childhood issues than normal. With the gorier aspects of this book, it isn't one recommended to younger readers but if you are in the more for a slightly creepier read, then this one might be worth putting on your lists...