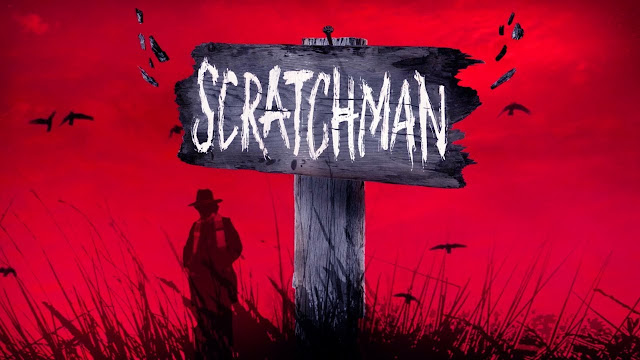 Scratchman is an idea that had been circulating the BBC offices since the mid-1970s as it was a proposed Doctor Who movie from the then-Doctor, Tom Baker and his companions, Ian Marter and Elisabeth Sladen. Alas it was never to be and everyone moved on, recently the scripts were unearthed in an attic and BBC Books have given them a new lease of life thanks to Tom Baker and James Goss who have finally put this idea into prose form. Was it worth the over 40 years wait? More or less, yes it was.

Reading Scratchman it is actually quite hard to visualise it as a film, certainly not on the budget that the BBC would have given it in the 70s and 80s and the technology that would have been needed to make it didn't exist then either. There are far too many sequences from the book that would required extensive visual effects, particularly in the second-half of the book, and it wouldn't have been able to do it convincingly in those days. But the novel has no trouble with that, it is excellent, creative, spooky and overall, very well written. It is a story that is split neatly into two-parts, much like how the original series had stories that were split into four or six episodes. And the two-part structure really works to the books advantage with the opening half focusing on the set-up and leading into the second-half which focuses on the main bulk of the story while wrapping everything up nicely and sees the Doctor confronting the titular Scratchman.

It is also a pretty unique entry into the Doctor Who world at BBC books because it almost entirely written from the Doctor's point of view. With most books being written in the third-person it is nice that we get an in into the Doctor's mind and see how he works. Scratchman also uses a framing device, much like The Trial of a Time-Lord with the Doctor having to account for his actions here and explain why he was right to do what he did. All these sequences work brilliantly, cutting back and forth from the Time-Lords to the bulk of the action as the Doctor explains the story. And this book captures the voice of the Fourth Doctor brilliantly. It helps no end that Baker wrote this book and put a lot of his voice into the piece, but it is just amazing at how much the narration actually sounds like the Fourth Doctor.

The pacing of the book is also excellent, starting out strong and immediately building a creepy atmosphere and things quickly get kicked into gear as the Doctor, Sarah and Harry arrive on an island infested with living scarecrows. While scary-scarecrows aren't a new idea for Doctor Who, nor is the twist about who is controlling them, but they are very effective in the story and the description of their origins is very nightmarish. Had this been made into a movie, it is the kind of description and imagery that would have upset Mary Whitehouse and her cronies. In fact, she's probably turned in her grave with the release of this book!

All the supporting characters are really well written, they are well-rounded and feel very real, some of whom get to appear in the second-half of the book. We've also got some fantastic cameos from various characters that have appeared in the show since its debut in 1963, to say anymore would spoil it but I was very happy with it!

The second act also gives way to some really hellish imagery and Scratchman certainly proves himself to be an effective and formidable villain for the Doctor, Sarah and Harry to have to fight. But his defeat is brilliant!

Overall then, this is an excellent read and a formidable book and as strange as this might sound, I'm quite glad this was never made into a film because it would never have allowed us to experience this story in this way. The writing from Baker is very enjoyable and he captures the voice of the Doctor perfectly, though we shouldn't expect anything else from the man who played him. He also gets the characters of Sarah and Harry perfectly. Elisabeth Sladen and Ian Marter would be very proud.

The plot is very nicely constructed, well paced and features plenty of sequences with excellent payoffs. Indeed, Scratchman is the kind of book you won't want to put down once you start it and its a brilliant addition not only to the world of the Fourth Doctor but the Doctor Who mythos in general.