Doctor Who: Heralds of Destruction - Review 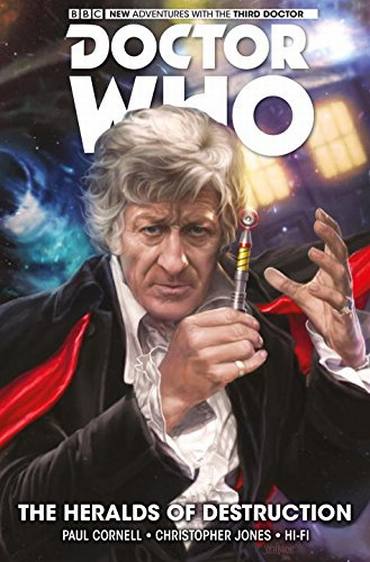 Following along with their run of Ninth, Tenth, Eleventh and Twelfth Doctors, Titan Comics have recently been putting out mini-series for the Classic Doctors. And following excellent runs for the Fourth and Eighth Doctors, it fell to Paul Cornell, Christopher Jones and HI-FI to deliver a fantastic trip for the Third Doctor.

This collection of the five-issue mini series is something of bittersweet affair as Paul Cornell announced this would be the last piece of Doctor Who fiction he would ever write. But he planned on going out with a seventies bang, with a splash of nostalgia.

Cornell captures perfectly the spirit of the Pertwee era, with this story following on not far after The Three Doctors. All of the UNIT family make appearances, including some of the smaller characters who popped up now and again. I had made connections between this era of the show and the modern era after Day of the Doctor and was very pleased to see those connections in play in this story.

I was very pleased with the dialogue which was pitch perfect, capturing the cadence and language of each character. I could hear Nicholas Courtney, Jon Pertwee, Katy Manning and Roger Delgado delivering each line as I read them and there are nice little moments for each character which are particularly nice if you know where each character is going to end up in the show proper. I particularly liked the hints of Mike Yates being disillusioned with the world, something which would lead him to join Golden Age in the later television story, Invasion of the Dinosaurs.

This series also initially starts with the Master apparently being the main antagonist for the five issues but this is quickly turned on its head as a new deadlier threat emerges. The first issues ends on a note which implies we are getting a sequel to The Three Doctors but just as you get comfortable with that idea, the rug is well and truly pulled from under you with the cliff-hanger at the end of issue three which is too full of spoilers to ruin it for you! Lets just say it is a reveal so well done that it leaves you awestruck at the sheer audacity of it.

Christopher Jones' artwork is just as brilliant as the writing. He captures the likenesses of the characters perfectly and he captures Pertwee's performance beautifully, even down to the little neck-rub he did when he was thinking. He also captures the look and feel of the Pertwee comics from the 1970s while making those suddenly feel very modern and there is a journey into the mind of Jo Grant that has a very 70s psychedelic feel.

HI-FI, the colourists for all of Titan Comic's Doctor Who ranges, deserve a mention here too. Their work is always excellent and they outdo themselves here, helping to capture perfectly the feel of the 1970s.

The book ends with a touching speech from the Doctor about moving on and taking the next step. Given this is Cornell's last piece of Who fiction, you can't help but feel the double meaning but that only makes the message all the more touching. He has written for the Doctor in all the media formats possible and has written some stand-out moments for the Ninth and Tenth Doctor's in particular.

This book is a joyous little love letter to everything about the Pertwee era. I would certainly recommend this book if you haven't read anything from the Doctor Who range at Titan Comics. This is five, near-flawless, issues of Doctor Who from one of the best contemporary writers.