Doctor Who: Festival of Death - Review 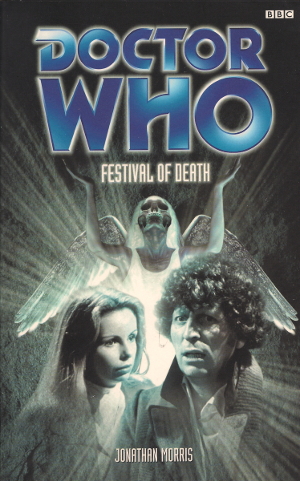 Originally released in 2000 and then re-released for the 50th Anniversary in 2013, Jonathan Morris' Festival of  Death, sees the Fourth Doctor, Romana and K-9 getting caught up in a time-twisting adventure that would probably give Stephen Moffat a headache! Out of all of the books released in 2013, Festival of Death and Fear of the Dark where my favourites. And not just because they were gloriously morbid.

The TARDIS arrives on an old luxury spaceliner that has been trapped in a hyperspace tunnel for nearly 200 years. Now though, the ship has been converted into a tourist trap, many of whom are there for the strange new attraction, The Beautiful Death, where the participants get to experience the afterlife first hand before being brought back to life. But the Doctor, Romana and K-9 arrive at the end of a recent tragedy where something has gone wrong and the system has turned the users into black-goo-dribbling zombies who now stalk the corridors. It does make one wonder if in the future, zombie movies are no longer a thing!

But it turns out this isn't their first trip to the ship and everyone they meet seems to know who the Doctor, Romana and K-9 are. Depending on you talk to, they are either heroes, escaped criminals or pests. But it seems the Doctor died during the tragedy. To stop everyone, including himself from dying, the Doctor, Romana and K-9 go back to before the tragedy and try to prevent it from ever happening. But there is just one other problem, the Doctor has run out of jelly babies.

In short, Festival of Death is real joy to read and it isn't hard to understand why it was one of the books chosen to be part of the fiftieth anniversary celebrations. We see the time-travelling-trio travelling backwards and forwards through time trying to avoid meeting their other incarnations. And Romana is making the Doctor study to retake his time travel proficiency tests! It really is a cracking adventure.

Mind boggling and bending and really amusing throughout, Festival of Death screams to be read and when it comes to Doctor Who prose, it is hard to give another fantastic example like this one.