X-Men: A Skinning of Souls - Review 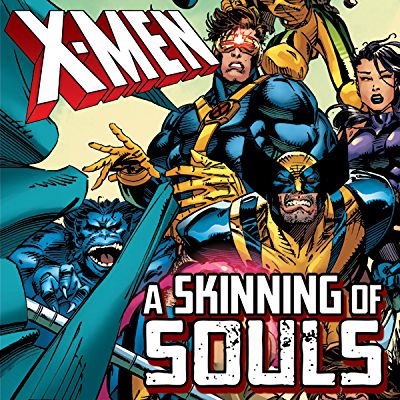 A Skinning of Souls concerns the X-Men following the events of X-cutioner's Song and Colossus has moved back to his homeland of Russia, where he finds himself and his friends, Jubilee, Wolverine, Cyclops and Psylocke are recruited into a paramilitary unit to investigate the disappearances of members of a small village. With many of the gang incapacitated by the Soul Skinner, the group uncover a plot surrounding Colossus's sister Illyana Rasputin and a quest to reawaken her magical powers. And all that is before a ghost from the X-Men's past turns up to cast doubt on the character of Psylocke.

Following immediately from the events of X-cutioner's Song, A Skinning of Souls also pulls in elements of Bishop's Crossing and Acts of Vengeance but it cleverly divides them into two distinctive threads rather than trying to juggle everything at once. The first plot line deals with the Soul Skinner and the second deals with Psylocke when a woman turns up claiming to be the real Betsy Braddock. There is also a rather enjoyable distraction thrown in concerning Cyclops visiting his grandparents to deal with the revelations he learned from the evil Stryfe and the tension growing between himself and Jean Grey.

Straight out of the gate is noticeable that this book isn't designed for a new reader as it relies heavily on plot threads left hanging from previous storylines which, if you have no idea what came before, means you'll have some trouble following this. The return of the original Betsy Braddock, now sporting the name Revanche acts as a direct follow up to the Acts of Vengeance story. This does mean the reader will need to know the details surrounding the confusing body-swap first published in 1989! The de-aging of Illyana is another thing the reader needs to know about from X-cutioner's Song and the reliance on these storylines means that the book will loose its weight if you don't know or understand what came beforehand.

However, with all of that being said, A Skinning of Souls also boasts what the X-Men were all about in the 1990s. Fabian Nicieza does a great job at handling the character's dialogue particularly Jubilee's. She remains sassy, spunky but still full of heart. Nicieza also remains adept at creating relatable and real-feeling relationships between all the characters. What has been forgotten nowadays is that the X-Men all acted like a family and that is something that Nicieza seems to understand here, with the closeness of all the characters. And there is a nice dose of soapy drama to keep things interesting too with one particular highlight including Psylocke, lusting over Cyclops, but what makes this all the more enjoyable is that Cyclops seems to be fantasising about it, something we know he does later on when he has a psychic affair with Emma Frost. And for all the people out there who hated the relationship between Scott Summers and Emma Frost, remember that here, Psylocke tried it on first! And there is some nice continuations to the budding romance between Rogue and Gambit one of the comic book industries longest lasting relationships.

Overall, A Skinning of Souls really works as a nice nostalgia piece for 1990s X-Men with plenty of drama and costumes by Jim Lee! While the overall-narrative is a little convoluted the story keeps itself, rightly so, focused on the characters involved. Like Jim Lee's,  Andy Kubert's artwork is iconic in this era and works beautifully alongside the story. But this book only really works for people who are massive fans of the X-Men because only they will understand it, unless you want to go out and by all the large collections of adventures before this one...