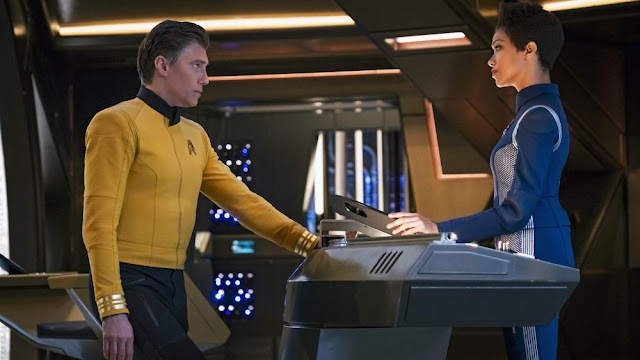 Finally, after what seems like an age, Star Trek Discovery is back and its clear that it has taken a big breath of fresh air that managed to shed the burdens of its debut season and let it roll down the hill.

When Star Trek Enterprise was cancelled in 2005, fans were faced with the idea that there wouldn't be a new season of Star Trek for the first time in twenty-five years. And that had continued for another 12 years, with a small splattering of movies here and there. And then last year, Discovery exploded onto our screens and told us that Star Trek wasn't all that dead.

Of course, it came with its own set of flaws as Discovery had issues with its tone and dialogue. The crew didn't feel like a family or a group of people who liked each other. And the levels of anxiety and brooding were dangerous.

But the fans gave their opinions and with the exceptions of those fans who openly attacked the show, creative staff and cast members, the production team listened and took the constructive criticism on board. Brother certainly benefited from a lighter and more relaxed tone that felt like someone lifting a heavy curtain. For once the crew spoke in a human manner and worked together like a family. There was no brooding and the anxiety was of a different tone to that of season one. As a result, we all felt more empathic towards the characters and cared what happened to them.

The first and perhaps biggest effect of Brother is that it distances itself from its opening season. Associating these problems with the fact that Captain Lorca wasn't quite right, or indeed, from our own universe, makes sense in terms of storytelling but from the outside, Captain Pike makes it very clear that he is extremely different from Lorca. Everything about him suggests he is very different from the power-hungry warmonger, Lorca. And Pike is no copy of Kirk, Anson Mount's performance gives him a much more grounded feel, not something that William Shatner ever managed to achieve with Kirk.

The other element that featured heavily in this series was the inclusion of Spock. Though the adult version of him didn't appear in this episode, his importance to this episode and it seems, the series as a whole, is very clear. We learn that his strained relationship with his adopted sister, Burnham was her fault, not his and it is clear that she views his legacy as a shadow over her life that she can never get out from.

The conversation between Sarek and Burnham about reverence also balances things out as the show has decided to use a character that fans will automatically feel reverence for. But, to make him a character with purpose and an arc, reverence won't be enough. The weight of Spock in the Star Trek mythos and the fans love for him could weigh heavily on Discovery and could mean the difference between its success or failure.

Moving away from the overall plot for this series, the regular cast are used well here. It is clear that Lorca's effect over them all has caused them to work together and rely on one-another. All the returning cast members feel like they are friends outside of work and it feels like a real workplace run by a real team. Overall it is a major improvement over the last season.

And it looks like Burnham's journey over the course of this season will be intertwined with that of Spock's. It should be interesting to see how that develops and I hope that they manage to do something with her character that gets her out of the shadow of her foster-brother. Stamets is also overshadowed by someone who isn't around anymore as everything on Discovery reminds him of his dead-husband, Dr. Culber. It was nice that the end of the episode gave him a reason to be excited about science again, though it is unlikely that this will change his decision to leave the ship. However, Wilson Cruz has been confirmed as a full cast member for this season so I will be interested in seeing how that plays out.

While Tilly and Saru didn't get much to do in this episode, I expect they will get plenty to do over the course of the season. Tilly has been enrolled in the Command Training Program and Saru mentions his sister. With the writers having said we might see more Kelpians, we should expect a trip for Saru to Kaminar in the future. Perhaps the theme of siblings is going to play a much bigger part of this season?

But overall, Brother was quite an epic way of kicking things off for Star Trek Discovery's second season. It was fun and engaging with plenty of potential and I can't wait to see where things go from here!