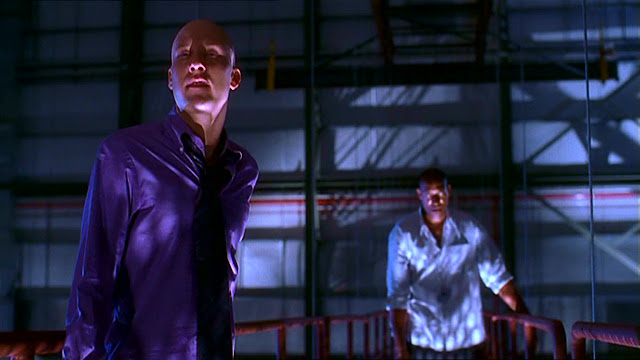 As with all the early four seasons of the show, episode eight sees another meteor freak come to town. This time he is someone familiar to the Kent family as he used to work on their farm and taught Clark how to play the guitar because he thought it would help him pick up girls.

Earl Jenkins then went away to work for Luthor Corp and was caught in an accident which left his body trying to expel the meteor rock gas by giving him some serious convulsions. Learning that there is a class trip to the very Luthor Corp plant where the accident happened, Earl takes all the school kids, including Pete, Chloe, Lana and Whitney hostage, and while the Luthors deny any knowledge of the mysterious, Level Three, there does, of course, turn out to be one!

It was nice to see Lionel back again, knowing how he turns out in the later seasons, it was nice to see this evil and manipulative side to him. There is some nice foreshadowing when he mentions he never forgets a face, talking to the Kent's and how he treats Lex does make you feel sorry for him.

Perhaps the best scene in this story is its final moments which are just fascinating. Lionel hugs Lex gingerly and without any real affection. Lex stares intently at the way that Jonathan and Martha comfort and congratulate Clark and there is some jealousy in his eyes. Perhaps this offers the best look at his later motivations in the show, Lex becomes best friends with Clark because he wants what Clark has. He wants to be loved in the same way that the Kent's love Clark. It is certainly an interesting thought.

Overall though, this is another fairly standard outing for the show's first season, nothing terrible but nothing fantastic either...