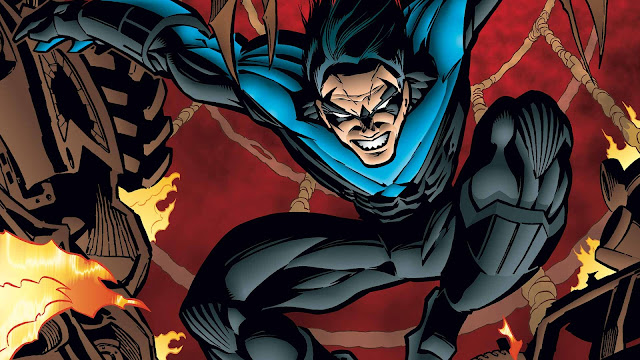 DC Comics continue to collect the legendary run of Nightwing comics from Chuck Dixon in the second volume, Rough Justice. And in the second volume, Dixon continues to bring the same youthfulness to the character that made Spider-Man so popular, which is really nice. This type of upbeat writing is so different from the dark and gritty storytelling that always goes on in the Batman books, so it is nice to have something to read to cleanse the pallet a little. That isn't to say that there isn't a little darkness to Bludhaven, just a little less in the way of Nightwing thinks about it all.

Dixon picks up the action where he left off in the first volume and while I don't think the writing here is the strongest writing for the comic book industry I've ever read, it is certainly Dixon's strongest writing project to date. In addition to adding character to the main players here, he also brings some in some familiar faces from Gotham. While I won't spoil the first character to turn up in the first few collected issues, because that was a real surprise, Batman and Robin turn up through the middle to see how Dick Grayson is doing and they stay around for a good portion of the 200-ish pages. But it is clear that Nightwing is still out to prove he is just as good as Batman and he sees Bludhaven as the perfect place to do that. Given how this book takes place not long after Knightfall and before Grant Morrison's run on the Batman title, one might view these few issues as the moment where Bruce Wayne realises Dick Grayson is a worthy successor of the Batman mantle.

While Nightwing is tackling the usual stuff a superhero has to deal with, we also get some nice appearances from villains, Deathstroke and Man-Bat. While this story was certainly a filler-story, it was nice to see Slade again as he is one of my favourite DC villains. And Dixon manages to squeeze in some nice moments between Dick and Oracle. I've always been a hopeless romantic and thought that Nightwing should end up with Batgirl and it was nice to see this touch being put into the comic properly. As well as the continuation of Dixon's run we also get to see the first annual for this run, but it was the kind of story that can quite easily be looked over. Not written by Dixon, it suffers because it doesn't feel like it should be in this book. But there is some great art from Greg Land, my favourite comic book artist, so that was nice!

Back to the main bulk of the book though and the artwork from Scott McDaniel and Karl Story continued to impress me. As well as their incredible take on Nightwing, I really liked their interpretation of Deathstroke. And although Scott got a lot of hate for changing his costume from the usual orange to a blue, I liked the new look, and I liked his Batman and Man-Bat too. While his cartoony art and colours might not be to everyone's taste, it kind of feels like Humberto Ramos artwork where you are either going to like it or you're not, I don't feel there is a lot of room for in-between here.

For anyone who enjoyed volume one, then Rough Justice is a perfect continuation for you. I am thoroughly enjoying reading this run, one of the best runs of Nightwing to have ever been written and it is nice that DC have put them together again for those of us who where too young to read them the first time around. Bring on Volume Three!