Nightwing: Back to Bludhaven - Review 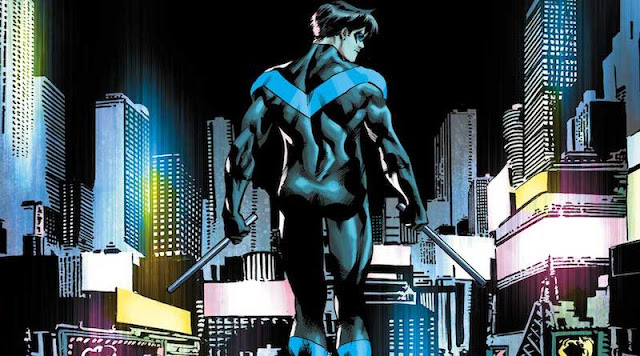 The premise of this whole story is that Nightwing wants to start fresh and go back to basics. He leaves Gotham, in a move that writer, Tim Seeley, decides to drag out for far too long. Nicely though, he gets there in time for a new gang of criminals who have moved to Bludhaven for much the same reason. The group, known as the Run-Off's consist of Mouse, Stallion, Thrill Devil, Giz and The Defacer, many of whom are known to Nightwing. This was actually a pretty enjoyable and original plot with these guys wanting to make a fresh start but still kicking around the city in their old costumes, just like a certain Dick Grayson.

The plot through this book is fairly simple to follow, there has been a series of murders and the Run-Offs are being framed for it. Out of all the Batfamily, Nightwing is the one with the biggest heart and he decides to help the group in working out who is really behind it. Back to Bludhaven isn't a story to read if you looking for nonstop action, look to Batman for that, but this book is an excellent look at Nightwing's character.

In the middle of this enjoyable story comes some very nice moments. There is the rescue of Mayor Madrigal and some touching scenes between Nightwing and Batgirl. Perhaps the biggest problem with this book is that the pacing slows down to a standstill once the main plot is over and done with. The issues where Dick finally gets together with Shawn was handled really well too, even if it did drag on for a little too long. But the final panel did make me want to pick up the next volume immediately!

It is the final issues that will be the deciding factor for you when it comes to whether you enjoyed the whole read or not. And it will make you wonder why Dick was so quick to get into another relationship when you consider his checkered past with women.

But overall, Back to Bludhaven is another solid entry into the Nightwing mythos. As a book, it isn't packed with action sequences but it looks at the character of Dick Grayson and while the other characters are considered secondary, the writing and the art style certainly isn't...