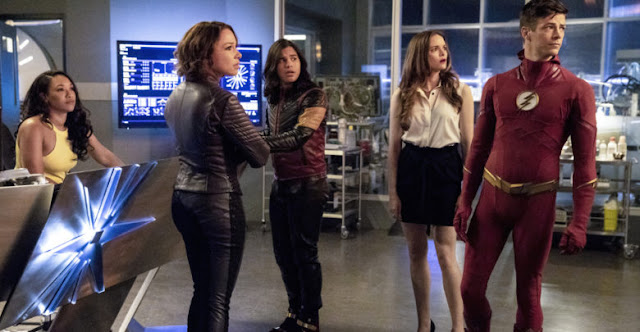 Looking at how bad The Flash's fourth season actually was, I will be careful not to give the show to much benefit-of-the-doubt this year as there is no sense of getting burnt that badly again! However, the second episode seems to have righted the ship again, wedged between the new storytelling abilites opened up by the inclusion of Nora Allen and her relationship with Barry and Iris is a new sense of energy that seems to be propelling the season along so far.

Its a little surprising how much we are seeing of Chris Klein's Cicada, this early on in the season. We're only a couple of episodes into the new season and we've already seen him kill off multiple meta-humans and this episode sees him have his first major fight against Team Flash, something that works nicely in the story's favour. While we don't know a lot about Cicada or his personal storyline, seeing his alter-ego lifestyle and how it affects his normal life gives him a surprising amount of sympathy.

Cicada also has proved himself to be a threat to Team Flash, one that they might not be able to handle as they all get their asses kicked royally thanks to the power-stealing knife he wields. More interesting is the physical threat he poses and the connection he seems to have to Nora. They seemed to recognise each other, perhaps they both herald from the future and I have some thoughts on what that might prove to be, but now isn't the time, lets see how the show continues for now.

It certainly gives the show a fresh feeling to be focusing on a new villain this early on in the show but it also poses some problems along the way. How will Cicada carry a whole series arc on his own, or will there be a major shift in focus half-way through the season, in the same vein as Doctor Alchemy with Savitar.

Nora continued to be a welcome presence here, even if I am a little bitter over the show's previous treatment of Wally West. The father and daughter dynamic between Barry and Nora proved to be interesting and the chemistry between Grant Gustin and Jessica Parker-Kennedy helped the characters feel like family members as awkward as their situation might be. Overall, Nora's characterisation is interesting on the whole. Played as a slightly obnoxious teenager, she is lovable at the same time. I would like it though if the writers could think up some new future slang, I don't want to keep on hearing 'Swai' all the time.

On the other hand though, Nora's relationship with Iris is also interesting and you really get a sense that there is more going on there than Nora is willing to admit. And for a character so underdeveloped as Iris, it makes a nice sort of sense that her storyline here resolves around feeling left out and alienation. Parenthood doesn't seem to be coming as easy for her as it for Barry and it is an interesting constrast.

And on the subject of contrast, this episode also highlights another problem with the previous season in the form of its tonal imbalance. Here, there was a clear attempt to recapture some of the humour and fun of the opening two seasons and while the previous season tried to do that too, it often lead to some really awkward moments instead. But just going from these opening two episodes, it seems the writers have a better handle on the characters this time around.

Look at the little Cisco storyline which made for an amusing distraction from the main action. Cisco's overdramatic way of dealing with his split from Gypsy leads to some goofy romantic fun. Carlos Valdes also manages to play it just straight enough that you still feel sorry for Cisco. And it worked as a way to enter the story about Caitlin's father and I might have had much more of a problem if I actually cared where her story was going these days.

But as per usual, the villain of this episode, Block didn't add much to the story, but unlike Gridlock in the last episode, Block is given more room to have a bit of fun. It also helped that her powers were quite interesting and seeing a human reduced to a block of meat was a definate change of pace for this show.

So far, following such a let down last year, The Flash seems to be picking up the pieces and the core relationship between Barry/Iris/Nora promises to continue being very interesting. And the rapidly accelerating conflict between Team Flash and Cicada has proved interesting so far compared to the usual slow and steady approach to villains the show usually has. And for the first time in a long time, it seems the writers have finally discovered how to have a good handle between drama and comedy again and it is nice that they are desperately trying to recapture the highs of the opening two seasons...