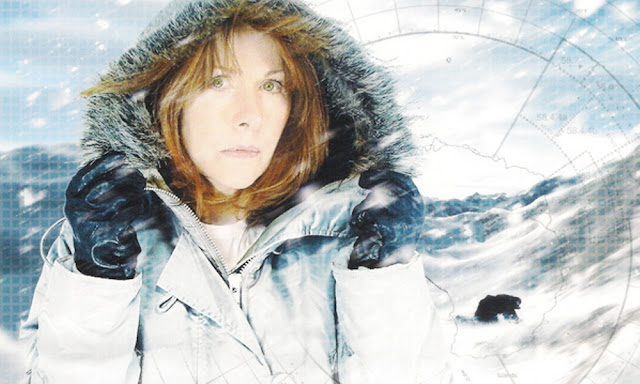 Episode Two of Sarah Jane's second series of audio adventures sees Sarah and Josh head to Antarctica to see how the scientific research she is pumping her aunt's money into is going. And this also happens to be where Will Sullivan works, the step-brother of her old friend Harry. It is also where Josh seems to think he should be jealous of another man. But the script from David Bishop promises that there are more complications than just that when they arrive...

Fron the off, Snow Blind tries to go for the kind of tense, confined atmosphere that comes with this kind of insolated location would give you, it almost feels like John Carpenter's The Thing. And it mostly succeeds on that front. The visual imagery from the sound design and Lee Binding's cover help as well. But there a couple of times when one wishes that the sound design and direction could have been a little more tense and that the script could have developed a but more of a sense of isolation. However, what there is of that, mostly works.

If anything is a major disapointment here it is that Sarah Jane's detective skills aren't on show again. Having time to find out things aren't right at the research base, she goes to a mysterious meeting along and then doesn't solve anything, events unfold around her and villains reveal themselves by circumstance. On the other hand though, it was nice that Sarah aquited herself well, demonstrating her usual level of stubborness and a everness in getting herself out of some pretty awful situations. And kudos to the performance from Elisabeth Sladen and the script from Biship for giving her some nice moments.

Sladen is, as always, wonderful and Jeremy James is still enjoyable as Josh. Tom Chadbon continues to do a great job as Will, bringing an easy dignity to the part, especially in the scenes with  Sarah. Perhaps the biggest mistep here is the relationship between Josh and Will. What begins as schoolboy bickering quickly becomes a distrust that it shouldn't have. It would have been nice for Snow Blind to have giving their distrust of one another room to grow, especially as the revelation at the end will no doubt impact the next story. The rest of the small cast do a decent job too, particularly Nicholas Briggs as Commander Munro, who is slowly loosing his grip on reality.

Snow Blind isn't just a standalone story as it has the job of being part of the larger overall arc. There are a couple of false starts and the connection between this story and the ones around it feels like one big coincidence. I'm not too keen on the idea of Sarah being some kind of messiah. It is slightly odd the way of having her involved in the story that have little to do with Sarah herself.

And as for the revelations at the end of the story, well, I'll reserve my judgement for now. Snow Blind stands as a decent thriller on its own, it is obviously also setting up for the future and however all that works out will determine my end thoughts for this little tale...