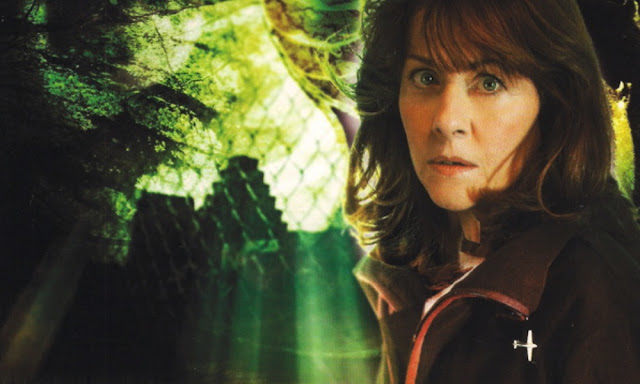 With Buried Secrets taking us to Italy and Snow Blind to the Antarctic, Fatal Consequences, the third story in Sarah Jane's second series, keeps things nice and local, taking place in London. In this regard, Fatal Consequences has the feel of a second start for the second series and it takes on the feel of the best story so far, Test of Nerve, which is a success in itself.

While the motivations behind the White Chapter and the Crimson Chapter have formed the backbone of the previous two releases, Fatal Consequences foregrounds their activities as Sarah sends Josh and Will to investigate alligations of animal abuse at a corporation that may have ties to the Crimson Chapter. This social crusading element feels very reminiscant of the first series and this story has a lot of throwbacks to them, finally succedding in grounding the whole series.

The company under investigation here is the same one that Sarah was looking into when we met her in Comeback and it was a nice surprise to see Maude, the leader of the protestors in that story, make a comback here. It was a pleasant surprise, the character by no means has a big presence but Patricia Leventon puts in a very fun performance. Strangely absent though is the character of Ellie, the tree-hugging young woman who was nearly a member of Sarah's gang in Series One.

The revelations we learnt about at the end of Snow Blind exert their full force on the characters here, but David Bishop doesn't just rest on his laurels here and he generates some new shocks to keep the character development moving. I must admit to having some misgivings about the conspiracy at the end of Snow Blind but Fatal Consequences manages to wash those away with a rather nice tie-in to Sarah's travels on the TARDIS with Jon Pertwee and Tom Baker. Even the final twist, once concerning a White Chapter member who is close to Sarah made me a little apprehensive at first but even that works and the more you think about it, the more it explains their motives. It is a clever twist that really works.

Elisabeth  Sladen, Jeremy James and  Tom Chadbon do an excellent job with the material they are given here and all three characters face some kind emotional journey. Sladen gets the confrontation with the leader of the Crimson chapter, James gets to face his darkest hour and Chadbon rises to the occassion as someone who is in two minds about his mission.

The previous two stories have also included little appearences from Jaqueline Pierce as the leader of the Crimson Chapter as well as David Gooderson, who played Davros in Destiny of the Daleks and Stephen Greif, either in news broadcasts or in brief conversations. This story finally brings all three of them together, with uneven levels of performance. Greif does a good and passable job as Sir Donald Wakefield, even though we are supposed to be more impressed about the ties to his character and Sarah than we actually are. And Gooderson puts in a decent performance as Doctor Dexter.

Really, the weakest link in this story is that of the Keeper of the Crimson Chapter, mainly because she doesn't really have any motivation. But I guess that's why Jacqueline Pierce is excellent in the role, she did spend four years in Blake's 7 playing a villian who had no motivation at all.

Fatal Consequences kicks things off with a twist and doesn't hold off on them. The cliffhanger is brutal and it took all my self control to stop myself from delving into Dreamland! But he's finally done it, David Bishop has taken all the loose strands of the uneven Sarah Jane series and made them work as something choesive, something I never thought possible...