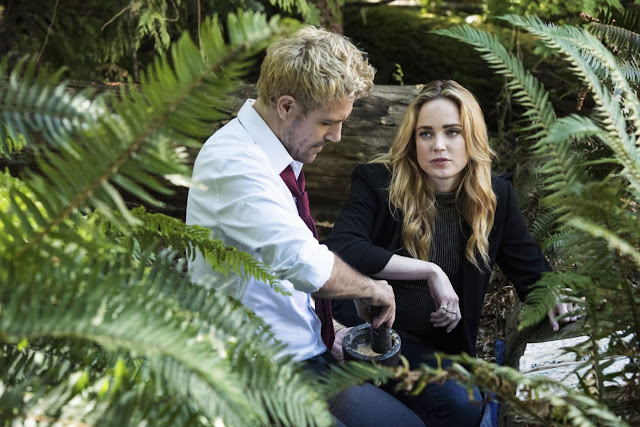 For the last two years, Legends of Tomorrow has been the gold standard of the Arrowverse and there is nothing in the premier episode of Season Four that suggests that this will be changing anytime soon as this episode is just as zany and self-aware as the previous season. We've also got the addition of a new member and the magical monster storyline which promises to be superior to the Mallus story from last year. So far it looks like Legends won't fall victim to the Season Four Arrowverse curse.

For the most part, the previous season of Legends worked in spite of the Mallus storyline instead of because of it. So it was a little worrying when Season Four was announced that they would be fighting some supernatural beings. We haven't got a sense of who the big bad for this season will be, this premier does a good job of incorporating the magical aspects of the show's new direction. So far there are no totems and no weirdly rendered CG giant-demons, just a hilarious story about a unicorn on a murderous rampage through Woodstock.

It has been nice to see that Arrow and The Flash haven't faffed around with introducing the villains this year, there is something to be said about doing the opposite with Legends. It is very important for a show to hit the ground running straight out of the gate but with so many changes this season, Professor Stein died last year, Jax, Amaya and Wally left last year and Constantine has joined the crew, it is important to establish the new team dynamic.

And things seem to have gone surprisingly well on that front, considering how many characters left in the previous season, even if I really miss having Jax and Wally around but if anything, the smaller cast seems to work in the show's favour. The gang feels tighter and more well-rounded, even Tala Ashe's Zari, who took a while to gel with the team last year, feels more at home here.

The biggest appeal so far has been the introduction to Constantine as a series regular. Even going off the few episodes he guest starred in last year and his own short-lived series, Matt Ryan seems to really shine in this group of misfits. That was the whole appeal of the show when it began, it was a group of Arrowverse misfits teaming up to save the universe and Constantine is a bit of a misfit at heart. And it is nice having a bit of a bad-boy on the team this year.

It should be nice to see some exploration of his character too. The writers have already begun to explore how troubled the man beneath the swagger and trench coat actually is. There also seems to be a newfound vunerability to the character. By the time this episode finishes, it seems that Constantine has joined the gang out self-preservation more than anything else. So far it seems that the inclusion of his character might be the continuation of his own short-lived series that fans have been demanding return to television, if not in plot then in character development.

Looking past this episode's focus on Constantine and  Sara's drama woes, it is an episode which is Legends at its most fun and goofy. What other show can you see the gang getting showered in magical goo and then having a drug-fueled psychodelic freakout at Woodstock?! What other show would you see a goofy office worker getting his nipple bitten off by a unicorn? And that is ignoring the fact that Janis Joplin, Jerry Garcia and Jimi Hendrix play a part of saving the day this time around.

If there was a plot point which didn't work too well this episode it is the story between Nate and his father. Their reconcilliation felt a little stittled and hashed out of nothing, because they spent the whole episode shouting at each other. If anything, this plot point worked better had forging a friendship between Nate and Mick but hopefully the show will find something interesting to do with Nate's father, Hank in the future.

It seems that Legends of Tomorrow hasn't missed a single beat in its transition between seasons 3 and 4 and if anything the smaller cast seems to have worked in the show's favour. And with this much zaniness and fun afoot, it is impossible not to fall in love with the show again!