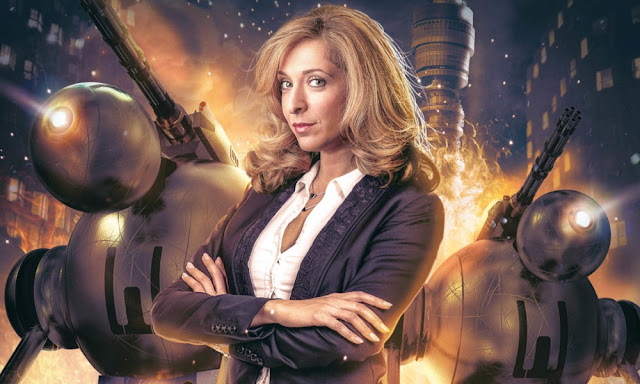 Big Finish have decided to follow up last year's, Before the Fall set with another Torchwood prequel boxset, Machines, featuring the somewhat awaited return of...WOTAN!

For those who don't know, WOTAN was the main villain for the William Hartnell story,  The War Machines and I have the sneaking suspicion that noone was really awaiting his return. Brought into the modern world, WOTAN works only a fairly generic villain, no different from any other robot overlords, like BOSS from The Green Death. However, unlike BOSS, WOTAN works because you get some story out of him being outdated. His henchman keeps humourously reminding him that he doesn't need a real evil plan because the internet exists and he can move from one device to another with ease this time.

But WOTAN is most certainly the weakest part of the stories he's in. The opening story, The Law Machines by Matt Fitton is most certaininly the weakest story of the set. It is a fairly generic runaround with some fairly generic ideas plastered over it. The Mayor of London has rolled in a new initiative, Law Machines based on the designs of the War Machines.Quelle surpise they go wrong and people start to get hurt. This incarnation of Torchwood - Yvonne Hartman, Lanto Jones and Tommy Pierce have to stay alive long enough to stop them. It is basically a survival thriller, moving from extreme peril to extreme peril until it comes to an end. It is compentently executed but nothing new.

The second story, written by Lanto actor, Gareth David-Llyod, tells the untold story of Lanto's first mission for Torchwood One. Blind Summit is an enjoyable story that shows us a new side to Lanto's character, young, panicky, friendless and funny. However, it is like the best Torchwood stories where it is quite dark and we get a very strong sense of how far Yvonne is willing to use people to get her own way. It is clear by the end that Lanto's entry to Torchwood wasn't one really of his own choice.

The third story is by far my favourite and possibly the best of the set. 9-to-5 has been written by Tim Foley, who really plays on how different the feel between Torchwood One and Three were. Torchwood One had a real culture vibe, that was something that Before the Fall played with and has continued here with Yvonne and Lanto going undercover in a dodgy temping agency.

There is a great Doctor Who story idea with literal temporary staff, it is a story that is dark, funny and character driven. The definate heart is Niky Wardly, who plays Stacey in this story. She has previously played Tamsin alongside the Eighth Doctor. She finds her day ruined when Lanto is escorted out of the building by security when she is trying to get her latte. Foley does a great riff on the RTD era of having a regular person's life interuptted by a mad man who turns their life upside down. Jane Asher also puts in a good performance as the boss of the company.

The thing that really anchors Torchwood One to the overall Doctor Who universe is Tracy Ann-Oberman as Yvonne Hartman. Yvonne is as magnificent here as she ever was, ruthless, heartless, cold, funny, friendly, intellegent and regretful. Each story has a great Yvonne moment. She is a delight to listen too and I hope we get more from her in the future.

But the strength of her character is also one of the set's weaknesses. Each story has to try and come up with some reason why she has to go out on these missions. Some excuses are fair but then you get The Law Machines were everyone around her is killed - a gross use of neglegence on her part where she wouldn't keep her job from it! Then no one ever mentions the slaughter again. 9-to-5 does it best because it doesn't give us an explanation, she's just there. Roll with it!

David-Lloyd is always good as Lanto. In fact, I enjoyed his character more here than I did with the Captain Jack team. The other returning character is Tim Bentinck as Tommy who is a technical wizard, stuck in his ways. It a little surprising though in Blind Summit when he turns up with an entire strike force. It is understandable that there would be cast constraints but Torchwood One does feel like it is only manned by three people!

But that's only a small quibble, when you've got someone like Tracy Ann-Oberman complaining about a government office being ineffeciant, you don't care about the small things! Putting aside the rather pointless return of WOTAN, Machines is a fairly enjoyable outing for Torchwood One. I am hoping for more Torchwood One stories in the future...