Doctor Who: The Woman Who Fell To Earth - Review 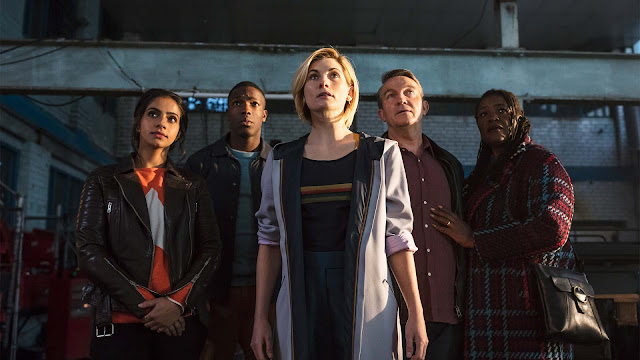 When Doctor Who returned in 2005, I knew nothing about the show. But when I first started watching Russell T. Davies era, more than any other television programme I had seen, it felt like anything could happen. One week, the Doctor travelled to the far future to see the death of the Earth, the next into Victorian times to meet Charles Dickins. After a while there came a slight structure to that narrative beat and when Stephen Moffat returned with his mind-bending plots, it felt fresh and new all again. And that sense has returned with the global phenonomen that this show has become under the eye of Chris Chibnall. The rules haven't been written yet, things feel new and dangerous and like watching some form of extreme sport, things feel thrilling and scary at the same time. And that feeling, more than anything will cement plenty of new viewers and fans into the series.

As an episode, rather than a new era opener, I would say that The Woman Who Fell to Earth is an enjoyable but not flawless piece of television. That's okay because the first stories for a new Doctor are always a strange beast. For a new Doctor story it has to have four things, A new Doctor who still feels like the original character, a companion or companions that you care about, a bit of action and a moment where it feels like what is happening could only exist in Doctor Who. The Woman Who Fell to Earth manages to tick all of those boxes and then some but it still didn't as strong as some of the previous post-regeneration adventures.

First-things-first though, I am pleased that the Doctor is still the Doctor. She is quite manic, implusive, weird but deeply caring. From the moment she appears, Jodie Whittaker is delightful in the role, and for those who know her from Broadchurch, it is fun to watch her cut loose in a different way. She manages to effortlessly capture that breathless feature of the  Doctor knowing what they are doing and at the same time, not having the foggiest a feature that normally encompasses the Doctor following a regeneration. There are definately some moments in this premier where she shines, some more than others but it took David Tennant and Peter Capaldi a few episodes to really settle into the role. Her comedic timing was hampered slightly by the strangely erratic editing but that isn't her fault and overall, Jodie is outstanding in her first adventure. 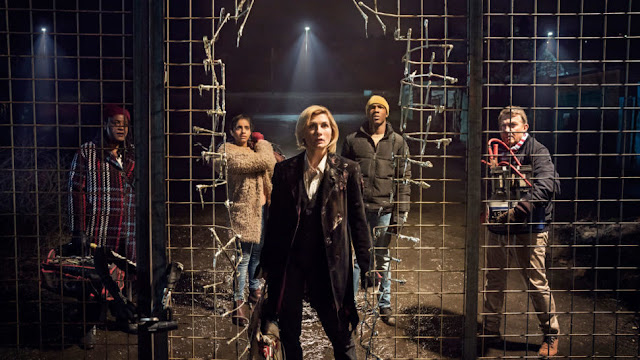 As always with a new Doctor, it will be fun to see what similarities she shares with her previous incarnations. From the opening episode, she feels a lot like the Tenth and Eleventh Doctors but what is more interesting here are the moments when she feels like something wholy unique. When the gang see a dead body, one of them offers to cover it, "Thank you Grace." she replies. In those three words, we learn so much about this new incarnation and what it is that she prioritizes. She is deeply respectful about the sanctity of life, not just in the superhero adventures, in a way all the previous Doctors were but also in the smallest way of giving someone dignity in death.

She is also someone who makes sure she learns her friends and allies' names straight away and thank them for their contributions, something which can't be said of previous incarnations. In fact, this is a Doctor who immediately has faith in those around her, "Don't care how, just use your initiative," she says several times when she gives her friends seemingly impossible tasks. Previous regimes of the show have shown the Doctor as dismissive, egotistical and even callous and I loved that this Doctor was still an alien but is more defined by her humanity and empathy. Her first priority is saving the Earth but when that is done, she is just as focused on making sure her friends are alright.

And while  The Woman Who Fell to Earth isn't the flashiest episode of Doctor Who to grace our screens, it is full of smart and subtle character choices, that make me hopeful in the writing of Chris Chibnall, who hasn't always had the best track record when it comes to Who or Torchwood. With his writing we can go from masterpieces like 42 and monstrosities like Dinosaurs on a Spaceship, Exit Wounds to Cyberwoman. 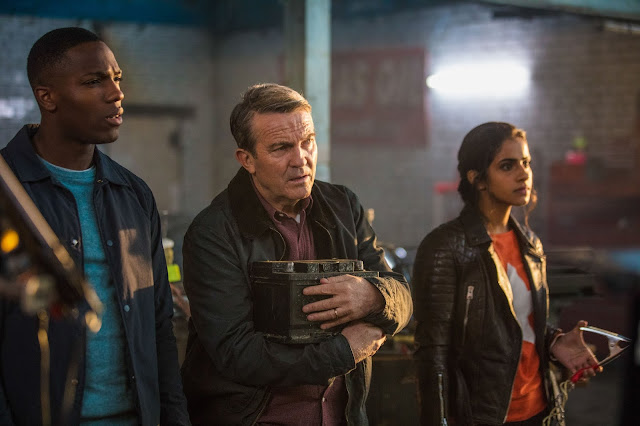 But my optimism comes from his companions, aimless 19 year old, Ryan Sinclair, played by Tosin Cole, bright policewoman Yasmin Khan, played by Mandip Gill and the timid former bus driver, Graham, played by Bradley Walsh. Each of them have a different world view, a different set of skills and different reasons for wanting to travel with the Doctor is she chooses to take them on. Ryan is looking for purpose, Yaz is looking to challenge herself and Graham is battling survivors guilt. Ryan and Graham also share a mutal reason of trying to live up to their wife/nan's legacy in the form of Grace, played by Sharon D. Clarke, who dies at the end of the story. With a larger than usual TARDIS team, Chibnall manages to give each one of them something to do and gives them reasons to be emotionally invested in each other. It remains to be seen whether Grace's death will bring the grandson/father relationship between Ryan and Graham closer and as they shared a primary school, Ryan and Yaz already have an inbuild camaraderie but still have plenty to learn from one another.

In keeping with most post-regeneration stories, the plot takes a backseat and unfortunately the alien invasion storyline isn't interesting in the slightest and the episode is occassionaly bogged down by some dodgy editing. I enjoyed the twist where the Doctor discovers she isn't involved in an alien war but some trap by an alien hunter looking for his latest trophy. However, that being said I don't think the teeth wearing Stenza warrior, Tim Shaw is going to be highly remembered by any Doctor Who fan but the crane action at the end probably will. Along with the shots on the hills overlooking Shefield, director, Jamie Childs has a fantastic sense of cinematography and the whole piece feels like no other series of Doctor Who. When Matt Smith delievered his iconic "I am the Doctor", speech, he did it atop a building. Jodie delivers her, open armed across a couple of cranes, thousands of feet above the ground.

Long before her final speech though, Chibnall gives us a much better speech about what it means to the be the Doctor. He offers us perhaps the best and most poetic take on regeneration to ever come out of the show before she goes on to build her own sonic-screwdriver out of spoons and stolen alien technology. It is Whittakers best scene, and it also feels like the Doctor Who we always knew and Doctor Who that we have never seen at the same time.

The Doctor puts it right when she says, "Right, this is gonna be fun." I couldn't agree more.