THE FOLLOWING LIST OF RELEASES FROM BIG FINISH WILL BE RELEASED ACROSS OCTOBER 2018. 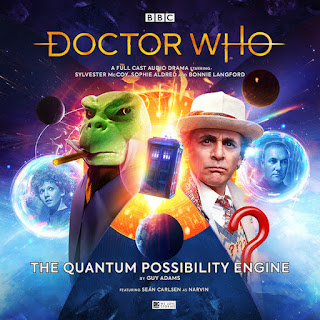 DOCTOR WHO: THE MAIN RANGE - 243. THE QUANTUM POSSIBILITY ENGINE

The Doctor and Ace are locked up. The TARDIS is gone. Things just couldn’t get worse, could they?

Of course they could. Things can always get worse — the new President of the Solar System, Josiah W Dogbolter, didn’t get where he is in life without learning that. That’s why he has a Quantum Possibility Engine. It’s a wonderful machine, creating a wonderful Solar System. And with this wonderful device, he can bring happiness and peace to all.

Either that or tear the universe to shreds, it’s hard to be sure which. 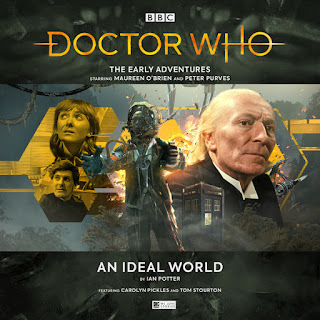 DOCTOR WHO: THE EARLY ADVENTURES - 5.2: AN IDEAL WORLD

Many light years from Earth, a vast human spaceship hangs in orbit over a cloudy alien planet. The crew have been travelling in cryosleep for many years, looking for a habitable world to settle, and have at last located one with potential.

However, they’re not the only people to have arrived in this place. The TARDIS has landed on the planet’s surface. The Doctor, Steven and Vicki explore and quickly find themselves separated.

But it isn’t merely the hostile environment and rogue terraforming drones they’ll have to deal with. Something else is living on this world. Something deadly and waiting to consume.

It’s an ideal world. But ideal for whom? 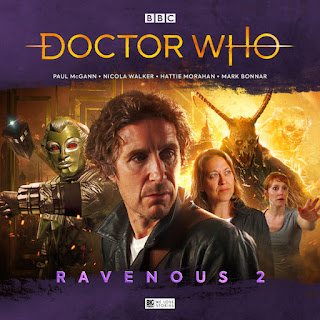 Having reunited his companions, the Doctor decides to lift their spirits by treating each of them to a trip to their home world.

On Kaldor Liv is confronted by a face from her past, and on Earth Helen must summon all her skill and knowledge to help save her friends from eternal damnation.

But try as they might to stay out of danger, dark forces are emerging. Dark enough to strike fear into the hearts of a Time Lord.

2.1 Escape from Kaldor by Matt Fitton
Returning to a home world she’d rather forget, Liv reluctantly accompanies Helen to the grand opening of a luxury shopping mall. But when a glitch in the system sends the Robots of Death on a rampage, Liv’s past comes crashing down about her.

2.2 Better Watch Out by John Dorney
The Doctor hopes to take Liv’s mind off recent events by treating his companions to a traditional European Christmas. But not everybody is full of the spirit of Christmas when a wave of misery follows the Krampus as they run through the streets of Salzburg.

2.3 Fairytale of Salzburg by John Dorney
With the Doctor and most of the population condemned to hell, Liv and Helen race against time to discover the source of all this chaos, and to find the one man who can save the people of Salzburg from eternal damnation.

2.4 Seizure by Guy Adams
As if it wasn’t enough to be trapped in the labyrinth of a dying TARDIS and pursued by a ghost, the team find themselves face to face once more with the Eleven. But the Doctor has bigger things to worry about when he discovers they’re being hunted by the only creature to strike fear into the hearts of a Time Lord: The Ravenous. 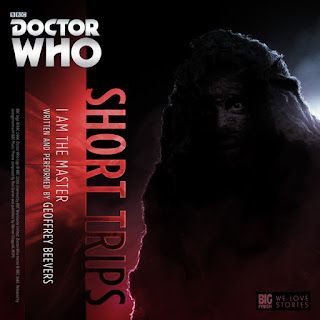 Please attend carefully. The message that follows is vital to your future...

However much longer that may be. 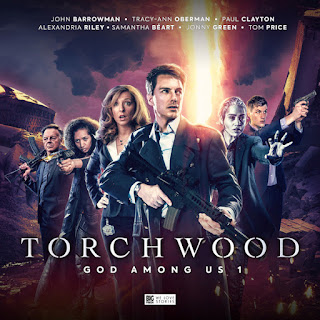 TORCHWOOD: GOD AMONG US - VOLUME ONE

When a God comes to Cardiff, the world goes to Hell.

6.1 Future Pain by James Goss
Torchwood pick up the pieces and move on. After all, there’s a whole new set of alien threats to deal with.
While Yvonne Hartman is asserting her authority as the new leader of Torchwood, Jack Harkness is hunting an alien god in the sewers – but what’s he really hiding from?

6.2 The Man Who Destroyed Torchwood by Guy Adams
Brent Hayden. To some he’s the darling of the alt-right, to others he’s a far-left crusader. A lot of people watch his videos, hang off his every word. Crisis actors? Conspiracies? Black Ops? Brent knows you deserve the truth. And Brent’s come to Cardiff, because he’s going to expose Torchwood. Don’t forget to Like and Subscribe.

6.3 See No Evil by John Dorney
Cardiff goes blind.
There’s a hunter out there in the darkness. With no escape, and the screaming getting louder, Jack Harkness and Yvonne Hartman each set out to save the city in their own ways.

6.4 Night Watch by Tim Foley
The Black Sun has come through the Rift. When it visits, sleep comes with it. Orr is the guardian, appointed to watch over the city while it slumbers. What will they find as they wander the streets?
Who are the lost souls, trapped with their demons? Who are the ones fighting even sleep? Who are the broken meeting their dreams? 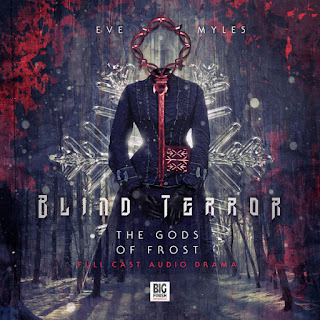 Following the death of her husband, Kathryn Ellis becomes the new housekeeper at Hodder Hall, keen to embark on a bright new future… only, her past won’t let her go just yet, and the ghosts that stalk the village threaten to cut her future short.

Eve Myles stars in this original gothic horror from the pen of Guy Adams, comprising six half-hour episodes, produced by the team behind The Confessions of Dorian Gray.