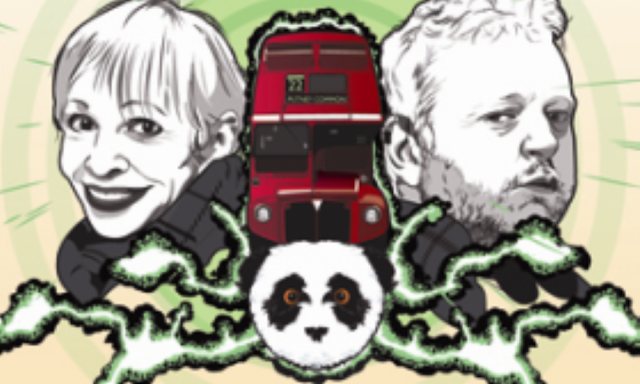 She never has been one to keep her public waiting and Iris Wildthyme has gathered a large crowd to announce her latest regeneration. And sure enough, after another close escape, there is only enough bats-milk cheesecake to save Panda from succumbing to a deadly plague. Iris Wildthyme changes before our eyes into her successor.

The only problem is that the new Iris Wildthyme is a fella. And worse still, at least in the eyes of Panda, he has a thing about healthy living - he even throws out the booze! But before things can really kick off between the pair, they are caught in the actions between the power blocs of 2018! And the only thing that can stop an all out war for happening is some dusty little disco in Malaga run by a love-struck Naxian refugee.

As you might have guessed, The Two Irises tackles a lot of the problems and strangeness surrounding the concept of regeneration. Happily though, it is a story that half makes you cover your face in embarrassment and laugh like a madman.

The top purveyor of this hilarity is the new Iris - Dan Hogarth, particularly in the scenes between David Benson's, Panda. Never have two straight comics been this funny.

But that isn't the end of the story, as you might have guessed from the title, there is a lot more going on in this story than it first appears. The big reveal at the end will leave you groaning, in a good way but as the action ramps up and nuclear missiles begin to fly, you'll be hard pressed to not wonder if two Irises will enough.

There is only way to find out though and if you are an Iris Wildthyme fan, this is a story that is well worth your time and attention. Overall, The Two Irises is another hour of hilarity from the masters at Big Finish...