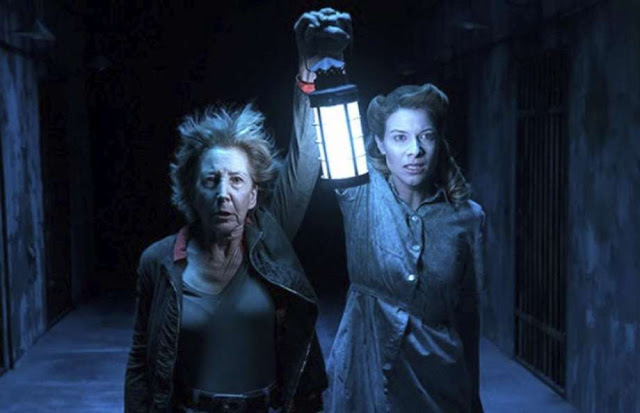 The success of Insidious, the low budget horror-flick about a family who are trying to rid themselves of some ghosts and demons with thanks to some kooky ghost hunters, and the success of its spin-off series, The Conjuring and Anabelle, has meant that director and producer, James Wan has spread himself a little too thin. A good thing then, that he had a number of people who worked under him in the previous movies have now stepped up to the plate to give us movies in his same vein. But without the technical expertise of Wan, you'll get films like Adam Robitel's Insidious: The Last Key, a film that is a clumsy and confused sequel to Insidious: Chapter 3, which was a prequel to the original two films, and it only offers some mechanical jolts.

Ironically, the best thing about this film goes against everything Hollywood holds dear. Most Hollywood movies are fronted by young stars but the Insidious movies are fronted by the psychic Elise, played by Lin Shayne, who makes for a most unconventional star, not only because she is in her seventies, but also because her character bit the bullet three movies ago. Set predominately in 2010, The Last Key sees Elise and her grating comic-sidekicks, Specs and Tucker heading to the fictional town of Five Keys, New Mexico, a town which proclaims to unlock your heart. She is there to investigate paranormal goings on in her old childhood home on behalf of its new owner, Ted Garza, played by the recent season-long villain on Arrow, Kirk Acevedo. The house itself is just like any of the others in the Wan-Verse, dilapidated, stained, poorly lit and has a large basement.

Now, the character motivations in a haunted house very rarely make sense, but Ted claims to have a surprisingly good one for staying put in his house, he has sunk all of his life savings into the property, make it up really nice and then sell it on. But all this turns out to be something of a red-herring, as does the 1950s-era fallout shelter below the house and so does the prison next door where Elise's father worked as a tyrannical warden, which is a looming symbol for the movies wasted potential.

For the most part, The Last Key settles for things which are very familiar, scurrying ghouls with some personal-space issues, yawning doors and yet another trip into the Further. And while the original two films managed to make the Further somewhere intensely terrifying, here it is starting to look dull and boring.

There is a great amount of showmanship and magical powers that go into making a movie like this as the tricks are simple and repetitive and once the audience know when they are coming and how they are done, will get bored of. Robitel tries his absolute hardest to copy the types of highs that Wan has enjoyed but he is just as lost in the script as the characters, who wander around the décor, lost in their own bad acting, very puzzling plot-twists, and cringe-worthy comedy moments, never once thinking to turn a light on or look over their shoulder.

Everyone knows that horror is the domain of great subtexts but there isn't much going on beneath the surface of this movie garbled plotting. There are hints of subtext including child abuse, serial killers and psychological issues thrown into the mix of the usual, don't open that door and it's right behind you moments.

At first glance, the end result is misguided but later viewings will show you the whole thing is just seriously confused. Maybe that is for the best in the end though...