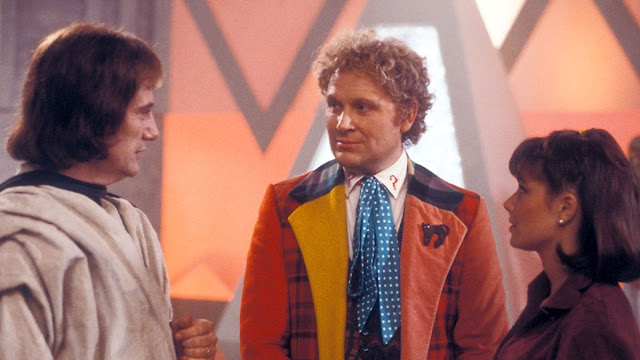 Paul Darrow's Teker isn't kidding when says that most people depart the Timelash with a scream.

Lets get this out of the way right now, Timelash is terrible. There is absolutely nothing about it that is reedeeming. It comes as little surprise to learn that everyone once associated with it has distanced themselves from it and is another example of a Colin Baker story that people use to unfairly bash his era of the show.

Unfortunatly, Timelash encapsulates everything that is wrong with mid-eighties Doctor Who. It is a tawdry package with tired direction, sets, costumes, dire scripts and acting, dodgy special effects even for the eighties, needless continuinty references and an even worse take on the shaky relationship between the Doctor and his companion, Peri.

But perhaps the stories biggest sin is in how it turns one of science-fictions, greatest minds into a mindless berks. He seems to have taken all his greatest ideas from the Doctor! H.G. Wells joins the Doctor on his travels in this adventure but serves no purpose beyond being another person the Doctor has to run around and save! As a result he becomes one of the most irritating guest characters to appear on our beloved show.

By his own admission, Paul Darrow plays the whole thing like Richard 3rd but at least he seems to have some fun playing his character that way. Everyone else is just so stiff and lifeless, there have been brick walls who have been more animated than this cast! But not all is doom and gloom, there is at least some...