Doctor Who: The Fires of Vulcan - Review 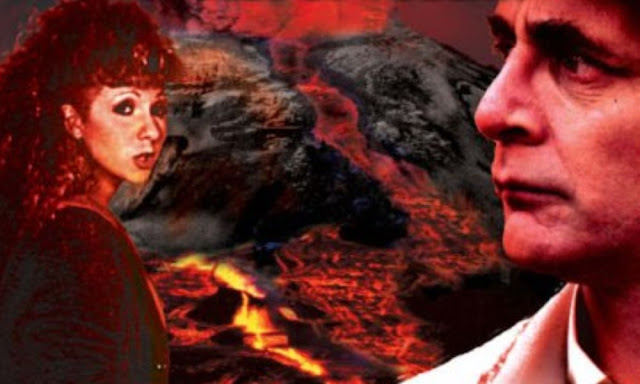 The Fires of Vulcan begins normally enough, an excavation of Pompeii in the 1980s of a newly discovered area of land, destroyed by the volcanic eruption. But there is an usual artefact laying in the ash, a battered English Police Box.

When the TARDIS arrives in Pompeii in 79AD the night before the volcano erupts, a servant sees the arrival of the Doctor and Mel and believes them to be messengers from the gods. The Doctor and Mel agree, they have come from the gods but it isn't the best story to be telling as there are people around looking to usurp the worshippers of certain members of the pantheon. Dodging dodgy dealings and crazy high-priestesses might have been bad enough but Mel was believed to be the Doctor's servant and her guide around Pompeii is a prostitute who assumes Mel is in the same line of business!

While Mel is looking around the city, the Doctor is making friends and influencing enemies. He quickly learns he shouldn't have cheated at dice, not even if he did it to get food and proper clothing. When a Gladiator's reputation hangs in the balance, it doesn't do to cheat him, even with a friendly gamble.

The pair soon discover that a hasty retreat isn't going to be possible when the TARDIS gets buried under rubble. The Doctor knows the future and a fact he is keeping from Mel is that he knows he, her and the TARDIS are destined to die in Pompeii in 79AD.

Before the televised episode, The Fires of Pompeii was broadcast, rumours were flying about that it would be based from this audio, in the same manner that Dalek was based heavily from Jubilee. The rumours proved to be false that means that both stories can be used in an interesting compare and contrast experiment. Like Fires of Pompeii allowed Donna to grow and show some humanity at the tragedy unfolding around her, Vulcan was the beginning of Big Finish's evolution for Mel. Mel was just as disliked as some fans didn't like Donna as a companion but Vulcan turned Mel from the shrill screamer on television to the brave, headstrong and dogged woman that the television only allowed us glimpses at.

But Vulcan shouldn't be compared too much with Fires because it can stand on its own two feet. It has an interesting plot with plenty of sub-plots on the go to keep things going for its four episode duration and there is an uneasy sense that at any moment lava is going to begin spewing from the volcano. If there is one problem to be had with this story it is the way author, Steve Lyons, gets out of the paradox he had written in. After setting it up so beautifully in the first three episodes, the fourth episode sees the Doctor and Mel getting out of it as easily as pi. But this is something to forgive as the rest of the trip is so damn enjoyable...