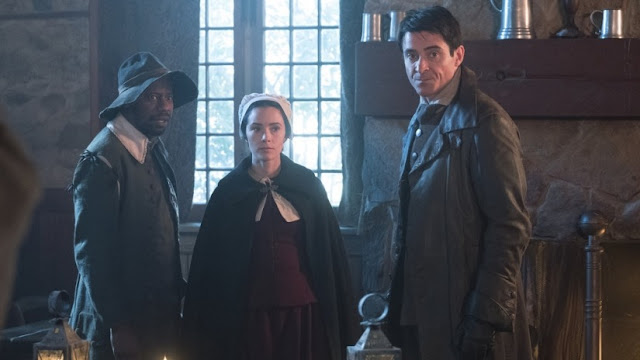 With Wyatt sneaking away to confront the almost unbelievable truth that his wife is back from the dead, Lucy, Rufus and their former enemy, Flynn are left to travel back to the little town of Salem during the witch trials. History has been seriously warped and the mother of one of America's greatest influences is next to be executed.

The Salem Witch Hunt is a case of my enemy is my friend as we finally see the alliance between Lucy and Flynn come into effect after his talk about it in the previous season. For this to work, of course the writers had to bench Wyatt but what better way to do it than by bringing his dead wife back to life, something which I think Rittenhouse is behind.

But just because he has been benched in this ep, it doesn't mean that Matt Lanter doesn't give his material his all, he is always fantastic in everything he is in, I've seen him in quite a few shows over the years, but Timeless has really allowed him to bloom. Its been a delight to see.

Looking past the witch trials, one of the most interesting things about this episode was the whole future events thing that Jiya can see. When she witnesses Rufus being shot dead by a puritan, she tells him. When Rufus goes back in time and is faced with this, he talks the man down, only for the man to be trampled to death by a stray horse and cart. It will be interesting to see what the writers have up their sleeves later down the line for Jiya.

Taking the gang back to Salem, the furthest they've travelled in time, gave us the opportunity for some great storytelling. It is an event in history which has lead to some great horror movies but very rarely has it been used in a way to ask the viewer some moral questions and gasp at the sheer injustice of it. In fact, the only other time I've ever experienced the true horror's of the Salem Witch Trials was in a Doctor Who novel, The Witch Hunters. I've never seen the television series Salem so this was a great taste for what that show might have been about. I always love these really historical episodes as it really peaks my interest afterwards making me want to learn more!

It was also great to see Goran Visnjic back in full murderous flow as Flynn and it was very easy to imagine a character like his surviving the witch trials. Flynn is so much less manageable for Lucy to handle than Wyatt and that was fun to watch.

This was a really great episode with some great historical content as well as being able to bring a tear to my eye when Lucy was saying all the normal reasons why the people were hung in the first place. One woman just liked talking to the birds, another just really loved her dolls. There still is an important message that I don't think we have learnt from history. Everyone is different, everyone has their own ways of doing things. If people like talking to the birds, leave them be. If people love dolls, let them get on with it. Individuality is what makes the world go round and this episode served as a great reminder of that...