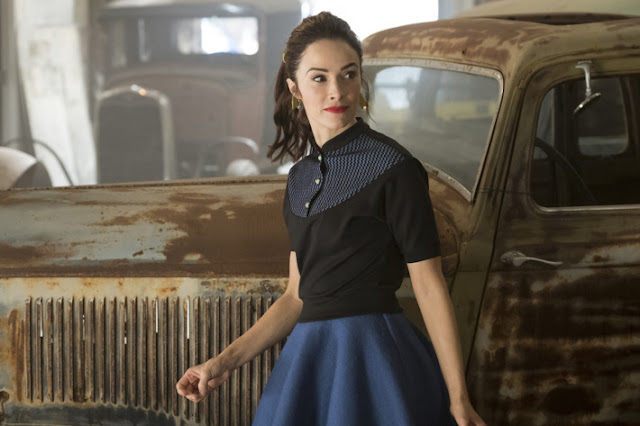 With The War to End all Wars leaving us with many questions as to what Rittenhouse's next evil plan will be, episode two picks up with the gang heading off to the races in Darlington South Carolina 1955 for some NASCAR fun.

But things don't start off too fun for the gang as Jiya continues to have her strange visions of the future. She sees Rufus' arm burned, something that only happens when he goes back to 1955 and burns it trying to fix a car. It will be interesting to see what the creators do with Jiya now that she is having these visions, especially as in the last season she was a major character to the overall plot, despite feeling like a bit of an underdog. It feels nice that we are being allowed to get to know her a little bit more and see what she is going through.

Definitely the highlight of this episode was seeing Wyatt getting a chance to let loose and unleash his inner nerd. He nerds out to NASCAR, famous racers and he geeks out about all the cars around him. It was nice to see this side of his character, I really liked this side of him and it is nice that we are getting more time to dive into the fun side of him. And it adds more sides to the characters and makes us invest in them even more, lets just hope the writers keep it up.

One of the best things about Timeless is how it addresses the past and how it acknowledges parts of history that haven't really gone through the changes and times compared to the present. This episode addresses how some things you might say or do wouldn't make a lick-of-sense in history, particularly when Rufus gives 'the Nod' to Wendell Scott and he is immensely confused by it. 'The Nod' wasn't something done back then and the fact that Wendell is so confused by it makes it all the more amusing.

The episode continues to expand on the idea that Rittenhouse has planted agents throughout history and Emma, the evil right hand women of Lucy's mother, goes back to make sure the races go up in smoke. But what would make it all the better was if Emma wasn't so one sided. She feels like she has one goal and one goal only. Let loose from the constraints of her enemies mother, she doesn't even think twice of trying to kill Lucy. But it seems like that is all she is here to do. These are only early days though, maybe and I hope she does, she will develop over time.

As well as seeing his geekier side, we get a glimpse at the more emotional side of Wyatt when he recounts his childhood and the things he went through under his abusive father. Wyatt always has been one of the strongest characters on this show, he is strong, funny, gentle, a fighter and someone who will have your back. But when he is telling us what he went through at fifteen you really feel for him.

And though it is made clear that this is something that Lucy and Rufus might never find out, it wouldn't really matter to them because the whole group love each other unconditionally. The Darlington 500 serves as a reminder that these three are a family.

I couldn't talk about this episode and not mention the chemistry between actors Abigail Spencer and Matt Lanter. The scene where they are both hiding in the boot of a car is completely sold by the pair. Lucy and Wyatt fancy each other something rotten. It is so obvious that Wyatt will always will always protect Lucy and when he finds out she is claustrophobic, his first instinct is to protect her. And we nearly got a second kiss between the pair and it gets interrupted...AGAIN!!!

Overall, The Darlington 500 is another enjoyable entry into the world of Timeless, taking us back to a time and event that not many casual viewers would have known about. There were some brilliant character moments and this show really seems to have upped its game and that is something hard to do as the first season was so brilliant...