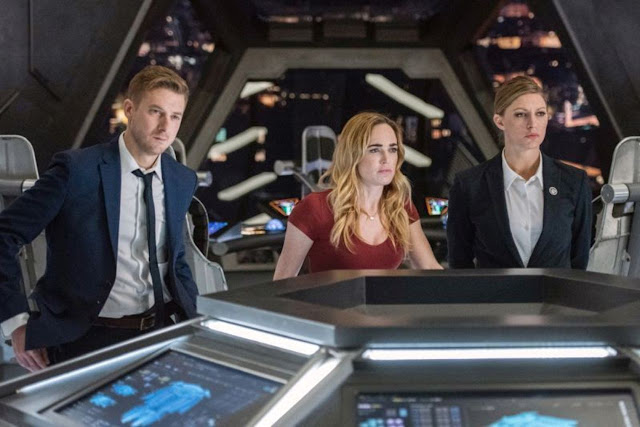 Over the course of the last two seasons, the producers of Legends of Tomorrow seem to have come to the conclusion that a really popular episode of the show will always have to include Damien Darkh. But with No Country For Old Dads, they had obviously decided that two Damien's are better than one. And they have been proven right because has been one of the most entertaining episodes of the show in some time.

The real reason this episode succeeded in the way it did was because it was willing to look at the moral grey-area that is the lives of the Darkhs. While Nora might currently be a thorn in the Legends' side, we have also seen her as a scared girl trying to fight off the powers of the demonic Mallus. And we see there clearly is still good within her and Ray has helped push her towards the moment where she will have to choose between good or evil. She might just be the most complex villain the show has had but I'm not even sure the word 'villain' suits her anymore.

Neal McDonough is clearly having a blast as Damien Darkh and it is nice to see him getting more characterisation as the show goes on. And if this episode proved anything it was that everything he does is motivated by his love for Nora, his daughter. While he might not have done right by her for the past twenty-something years, he still has a fatherly concern that is very apparent. It shall be interesting to see where he goes over the remaining course of the season, it is clear that his wants for Nora and Mallus are two different things.

I guess though that depends on how much you read into the final scene as I wasn't sure if this was Damien willingly giving Nora over to Mallus or not. Whatever is the case though it looks as though the father/daughter conflict will be the backbone for this season and with two characters like Damien and Nora, that should be to the season's benefit.

This episode's use of time travel was also a memorable one. Both Ray and Nora were powerless against a Damien Darhk at his prime in 1962. It was quite a treat seeing Damien at his peak, with Neal McDonough in a rather unconvincing wig!

But poor Ray, his friend were so busy wrapped in their own heads that none of them noticed he was missing. While I love Ray, his naiveté is getting the better of him, his inability to see the worst in people is getting dangerous. While he and Zari helped the younger Nora, he can't understand that no matter how much he wants to help the older Nora, she doesn't want to be helped. Could his feelings finally put the team in terrible danger in the future?

Legends of Tomorrow also did a really good job of setting the stage for the return of Wally West and Rip Hunter. And while in this episode, Wally did get involved, it wasn't as much as I had hoped. Hopefully in the next episode we get to see him in more action.

While there still isn't any real advancement on what Mallus is, there was a little progression on that plot. Nora finally connects with the spirit totem she had stolen from Amaya and while she and Zari were searching for it, they discover that it has turned to the dark side. Mallus now has control over the spirit and water totems and if it hadn't been for Wally, they would have had the fire totem too.

And the mysteries in this season just keep coming, this time it is one concerning Ava Sharpe, with Rip Hunter having Gideon delete his file on her. The producers leave that little mystery dangling in front of us, which they will deal with later on down the line...