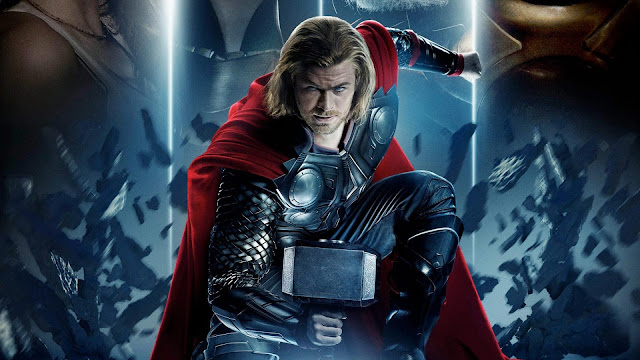 Undoubtedly, some of the best moments of Thor come not from the hammer-throwing, battle loving Norse-god, but from Natalie Portman who stars as Jane Foster, an astrophysicist who discovers Thor, Chris Hemsworth, in the New Mexico desert. The film quickly establishes her as a hard-working, fiercely committed professional, trying to make her way in the world. And it isn't hard to see where her character is coming from when she turns into a girly mess meeting Thor. In a star making move, Hemsworth rightly plays Thor as an uncomplicated man of action, with the moral clarity of a 40s swashbuckler and the body of a 21st century muscle man, he embodies the large and loud movie that surrounds him and this is the sort of movie designed to remind movie goers why superhero films are so cool in the first place.

Directed by Kenneth Branagh, a man who has never done something this big and succeeded before, equips himself well, dividing the action between Earth and Asgard, the realm of the gods and the place of intrigue. Though he is unhappy when Odin, played by Anthony Hopkins, passes him over as the heir to the throne, Loki, Tom Hiddleston, joins Thor and his friends as he raids the realm of the Frost Giants after they break and uneasy peace between the Asgardians and Frost Giants. Hemsworth finds himself exiled to Earth and is confused by modern life but not too confused. The way he goes about his godly, heroic business is used as a running gag throughout.

And that to, is something like the movie unfolding around him. Whether the action takes place on Earth or on Asgard, Thor charges forward with its head down. Had its action sequences not been so enjoyable or the characters not so well rounded, it might have seemed like a rather pedestrian take on  a Marvel movie trying to tie itself into a larger universe. Like the movies before it, Iron Man, The Incredible Hulk and Iron Man 2, it does tie into a larger universe but Thor has an identity of its own, it is the simple story of a handsome god who falls to Earth to remind us what heroes are...