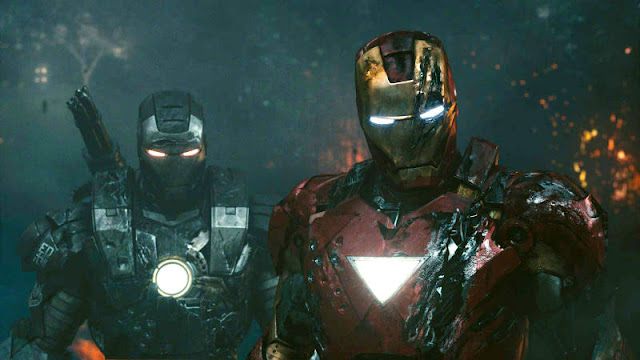 The primary challenge for any blockbuster franchise, is to be big but fleeting. Iron Man is a good model to demonstrate this, largely thanks to the performance from lead, Robert Downey. Jr as the flamboyant narcissist, Tony Stark. And the filmmakers have to place as much value on character and world-building as they do superpowers. Sequels follow a quest to be bigger, have more action and have a heavier feeling. Iron Man 2 comes perilously close to being on the tipping point, Spider-Man 3 was on that tipping point and fell off and but like the previous instalment, Iron Man 2 is clean and efficient and most of the additions don't feel like substractions from the original instalment. In showbiz, this is called a successful summer blockbuster.

Heralded as the father of world peace, Downey's Stark has become so busy building monuments to himself, he's handed control of Stark Industries over to his friend, Pepper Potts and has begun to devote all of his time to his new role as Iron Man. But he soon realises he faces adversity from within and without. Rogue countries and rival industries have begun trying to form their own Iron Men, particularly Justin Hammer, played by Sam Rockwell and branches of the Government want to bring Stark under their control. And then there is Ivan Vanko, played by Mickey Rourke, who takes up the mantle of Whiplash and continues an old family vendetta. Tony also finds out that his arc reactor, what was keeping him alive, is now killing him and a new employee for Pepper, Natasha, played by Scarlet Johansson has something to do with Nick Fury, played by Samuel L. Jackson. Iron Man 2 also sees the first appearance of Don Cheadle in the role of James Rhodes, replacing and greatly improving the role performed by Terrance Howard in the first movie.

All that is practically two movies' worth of material to cram into one, but luckily director Jon Favreau and screenwriter, Justin Theroux treat the material with wit and a light feeling that stops this movie from bloating out of proportion. As expected, Downey is reliably funny as Stark and the rival in the form of Rockwell's Hammer proves a formidable opponent. He is someone who is a creature of equal vanity and who continues to haplessly undermines his own nefarious schemes. And the long stretches between the action sequences could be problematic for other movies of this kind but as with Iron Man, the splashy action sequences actually turn out to be the least compelling of the whole thing. In this case, it is a matter of the less money thrown at it, the better the whole product becomes...