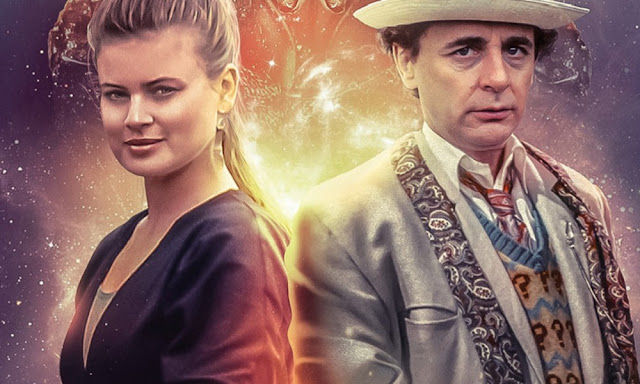 As a novel, Nightshade, by Mark Gatiss never really did a lot for me. So you can understand why it has taken me this long to listen to the audio adaptation originally released in 2016. The only reason that the book has such a high reputation amongst readers is because it reminded readers of a certain age of the Phillip Hinchcliffe years as producer. You've got a remote village being stalked by a horrific threat. That wasn't something that the Virgin New Adventures did very often, neither did the final few years of the television show but it is something that was done a lot in the 1970s era of the show.

I won't say that the adaptation by Kyle C. Szirkora didn't do much to improve the original source material for me but it did improve it on a number of aspects. I still don't understand why the Doctor suddenly decides to stop travelling but Szirkora is a better writer at making that an emotional plot-point throughout the play. At first it just seems like Ace has to go along with the Doctor choice, but then she is presented with a seemingly impossible choice. I also disliked the slow pacing of the book and the many uninteresting characters but luckily, both of those points are permitted in an audio-drama, with a runtime of two-hours, the audio has to get going straight away, so the guest cast has to be cut down to five interesting characters.

The one character who really benefits from the adaptation treatment is the titled character. Retired actor, Edmund Trevithick worked on Professor Nightshade in this story. John Castle does a brilliant job as the character who comes across as a William Hartnell-esc person. He can be incredibly cruel and horrid to some people but kind to others. You want to really love him but he does things and says things that stop you from doing that. Ace gets to go off and do her own thing in this story so Trevithick becomes the 'companion' for this story and this allows for his discovery of his heroism to be the backbone of the entire story.

Ace also gets a lot more to do here, she begins the story not wanting to stay in the 1960s forever, even if the Doctor does but gradually, she comes round to the idea when she meets a guy she begins to have feelings for. The way this plays out at the hands of Szirkora is handled a lot better than it was in the original novel, which seems to drive the final wedge between the Doctor and Ace. I'm not sure I enjoyed the way the audio ends on an implied decision but given this story leads into Love and War, I guess you'll know the end decision. And it shows us how devoted Ace is to the Doctor, mirroring what Big Finish did between Ace and Hex and Clara in Series Nine of the television show. But her actual romance with Robin is a little bit jarring but there never was going to be a way around that on audio.

But outside of Trevithick and Ace, Nightshade just comes across as Doctor Who's greatest hits collection. It has isolated settings, ancient evils, gross monsters, its all here. It feels a lot like Image of the Fendahl and even tries to weave an ancient curse and mythology into the proceedings without allowing it to make sense. Blair Mowat does a decent job on the musical front but I'm also not sure that Scott Handcock's direction pushed McCoy in the right direction.

It hadn't been for The Highest Science, this would have probably been the worst novel adaptation to date. Like Theatre of War, Nightshade is completely underwhelming on audio, it is on an equal footing many other tales but it didn't really deserve to be translated into the audio format.