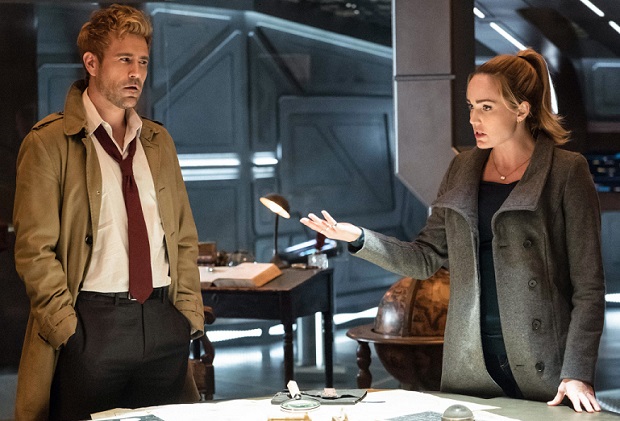 Finally, after what feels like years over here in the UK, Legends of Tomorrow has returned, this time with John Constantine in tow!

Thankfully, not even the Olympics could keep the Arrowverse away and Legends remains on fine form thanks to this mid-season premier that brings in a terrific guest star and even advances the Mallus conflict considerably.

That brilliant guest star is Matt Ryan as Constantine making his second Arrowverse appearance since the cancellation of his own show. Now, as much as his appearance on Arrow was brilliant, it was apparent that it was never designed as anything other than a plot device, a way of progressing the strange and downright stupid plot of the show's fourth-season. But his inclusion in Legends feels more like a natural progression and he is thrown into the mix a little more smoothly, building nicely on the recent developments surrounding Mallus and the Darhks. If anything, this feels like a brilliant inclusion for Constantine on a guest appearance basis for a little while, but that doesn't seem to be on the cards just yet.

And that is a great shame because Matt Ryan proves that he is more than able to hold his own with the other characters. From the opening moment when he swaggers onto the Waverider and shamelessly flirts with Leo, he felt like one of the gang. And as always with this show, the best moments didn't always come from the actions scenes but the quieter bonding moments. And nowhere was this more true than those moments between Sara and Constantine. The episode explored their history with a sense of fun while showing us that they are both just horny ne'er-do-wells at the end of the day! But perhaps the biggest accomplishment from Daddy Darkhest is that Constantine finally feels like a proper member of the Arrowverse as his wants and desires intertwine brilliantly with the other characters.

I can't be alone in thinking that Daddy Darkhest would have made a brilliant Halloween Episode, it has a haunted asylum setting, exorcisms and a brilliant homage to The Shining, thrown into the mix for good measure. All the exorcism scenes were suitably creepy and the general feel of this episode felt a lot different from the norm. In fact, if anything bogged this episode down, it was that we still don't understand much about Mallus. He is shaping up to be one of the most interesting villains in the Arrowverse but there is only so much you can accomplish from a creepy disembodied voice, even if that voice is made by the magnificent John Noble. There just isn't much in the way of development for him yet.

But even if Mallus isn't the most nuanced villain in the show so far, we got some development for two of his minions, Kuasa and Nora Darkh. I was concerned at the beginning of this season that this group of villains would be a little too much like the Legion of Doom. However, the Legion was a group of self-interested and conflicted individuals, this team is anything but. Both young Nora and Kuasa found their loyalties being tested in this episode.

And we get a better sense of what drives these two. For Kuasa, she is hell bent on saving her people, even if it means literally battling her grandmother and making a deal with the devil to do it. For Nora, it is her unhappy childhood, trapped in a number of mental institutions and longing for her absentee father. In particular, Nora seems set to have an enjoyable character arc as the season progresses. All her future interactions with the Legends will be marred with her memories of her time with Zari and Ray as well as the nagging sensation that Damien isn't the kind of father that she wanted. And as entertaining as Damien Darkh is, hopefully this episode will pave for some more dramatic turns for him.

Something else that Daddy Darkhest will be notable for is the final exit of Wentworth Millar as Leonard/Leo Snart AKA Captain Cold. Leo announces he is heading back to Earth X to propose to his boyfriend, Ray but Millar leaving Legends will leave a big hole in the show. It is surprising that the writers didn't make a bigger deal out of his departure but you also get the impression that was a purposeful decision and it actually works as a quiet and emotional standoff for his character. It will interesting to see if there might be a return from him, no matter how big or small down the road. As always with the Legends, only time will tell...