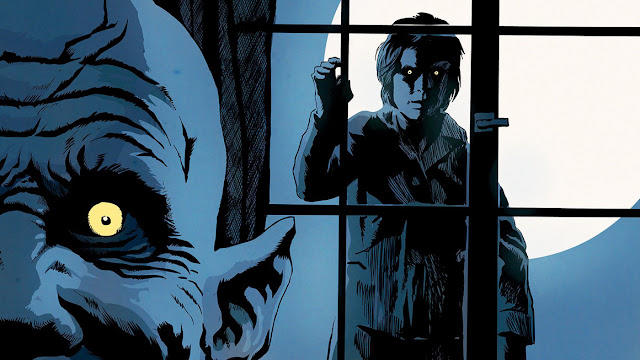 Ben Mears arrives in the quiet and sleepy town of Salem's Lot to complete work on his latest novel and finds himself fascinated with a local haunted house that has fallen into wrack and ruin. So drawn to the house is he that he intends to purchase it, only to find that another newcomer, Richard Straker has brought it. As the two newcomers settle into their lives, Mears begins to notice some strange things going on, it slowly becomes clear that something has arrived in the town. A dangerous something that has teeth...

Salem's Lot was never originally intended as a television miniseries and Warner Brothers had originally set it out to be a feature film. But as the novel from Stephen King relies heavily on the slow burn of Mears gradually coming to realise what is going on, the whole thing proved difficult to work on as something for the silver screen. So, screenwriter, Paul Monash, who had previously worked on Carrie, was given permission to adapt the novel into a television miniseries with Toby Hooper brought in to direct the piece.

And to his credit, Hooper manages to adopt a creepy, understated style that works brilliant in accordance with the original work from King. Even in the sun-drenched hours of daylight and before people start to disappear, it is apparent that all is not well in Salem's Lot. This is something that Hooper manages to convey by putting emphasise on the Marsten House and some of the town's darker elements. It has the sort of American Gothic style that all films by Edward Hopper and Alfred Hitchcock had and it works just as brilliantly here with a real sense of impending danger.

James Mason's performance is easily the brightest, despite him playing one of the bad guys but he is clearly revelling in the darker elements and his acting suits the gothic tone perfectly. David Soul as Ben Mears is a solid main cast member too and he fits perfectly the way Stephen King writes his male heroes. And the casting of the pair somehow manages to compliment the pair perfectly, the suave European of Mason's older character and Soul's all-American ruggedness bounce off each other brilliantly.

Taking the slow approach allows the whole piece to work too by slowly weaving horror elements into the lives of our characters. The attack on the Glick Boys has a jump-scare involved that actually works and the whole box-from-Europe thing has a sting of terror to it as the box slowly begins to move. Indeed, the first episode all comes to a head when Ralphie Glick appears at his brother's window, levitating and surrounded by smoke and possessing a mean set of canines. And the sound designers obviously had great fun making you squirm with the fingertips scraping on the glass, a noise that will stick with you long after the 184 minute runtime.

With the first episode brilliantly setting everything up, the second can just jump into proceedings with Ben and his few allies working out what the hell is going on. Kurt Barlow, the ancient, Nosferatu-like vamp begins to get a lot bolder in how he takes his victims, allowing the film makers another opportunity for a brilliant jump-scare. It is pleasing to see that even as Hooper ramps the tension up, he still can dial things back like with the brilliantly tense scene between Mark and Susan heading into the Marsten House. The Marsten House is a brilliant piece of set design and when Hooper goes for those wide-shots, you really can see just how decayed and broken this evil house is.

As the movie ends with Ben and Mark still on the run, hunting and being hunted by Vampires in Guatemala, the horror of Salem's Lot continues to drift in, even in its final moments. Hooper's low key approach works excellently with the sound design and some terrific set design. So solid is its atmosphere and scares it is easy to understand why Salem's Lot is so often considered one of the best Stephen King adaptations to date...