Doctor Who: Breaking Bubbles and Other Stories - Review 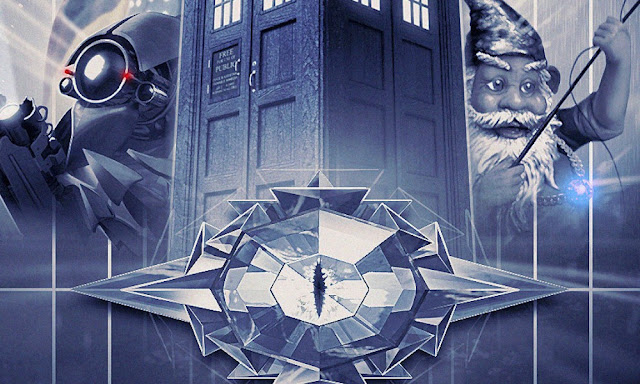 To me, the anthology releases from Big Finish are always something to be enjoyed. Even the weaker ones, something like Recorded Time are enjoyable. I love sets like Circular Time and 1001 Nights. And when this set was released, Breaking Bubbles was in the middle of some disappointing trilogies in the Main Range, it came as a real breath of fresh air.

Opening the set is Breaking Bubbles, written by L.M Myles. The story is about a disposed dictator being escorted in a palatial spaceship. It actually turns out to be quite interesting, mostly all down to the strong writing and performance from Jemma Churchill as the dictator, Safira Valtris. She turns out to be a complicated and interesting character and all the scenes she shares with Peri are the best in the story.

The second episode, Of Chaos Time The, by Mark Ravenhill, is a good jumble of a story, just like the title suggests it will be. But don't worry too much, the Doctor is just as confused by the events as the listener is. Ravenhill does something not every author has done and uses the Doctor's inner monologue as a way of telling the story and it really works. But apart from the gimmick, it isn't a particularly memorable tale. But if you can't use one 25 minute episode of something like Doctor Who to experiment, what can you do? (Fun fact: I once starred in a play by Mark Ravenhill called Totally Over You!)

The definite highlight of this set is the third story An Eye for Murder by Una McCormack, who is a much loved author. While this isn't quite her Big Finish debut, she had a story in a Bernice Summerfield set released a month before Breaking Bubbles, this story was written first. McCormack manages to pack a ton of stuff into the 25 minute format, with the Doctor and Peri investigating strange goings on in a women's college in 1939, on the very eve of WW2. It is surprising that this story goes on for half-hour because of all the presentation and characterisation that is packed into it.

Everything gets wrapped up in The Curious Incident of the Doctor in the Night-Time, a play on the play, The Curious Incident of the Dog in the Night Time. The narrator of this story, Michael is even played an actor from that play, Johnny Gibbon. Like the play, Michael is someone who is on the autistic spectrum, only here he runs into the Doctor, someone who has elements of his personality that is on the autism spectrum. And they team up to fight an alien invasion. It is a really interesting and fun story, it is unique and a very strong tale.