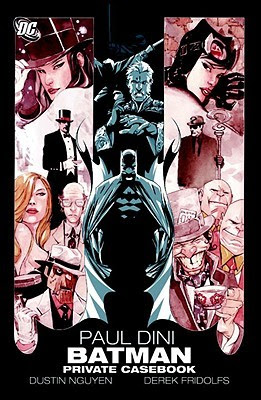 Batman Private Casebook sees author, Paul Dini complete his run on the Batman title and the stories are really remarkable, even if they are largely overshadowed by the Batman RIP tale that was also being done at the time. These stories are done in little one-shot tales, evoking the feel of the Batman stories from the 1990s rather than the large and complex tales we comic book fans are used to now. But when each of these tales are read together we get a nice little story which sees Dini finally carving his own little place in the Bat-Universe.

Throughout his run, Dini allowed for a few old villains to turn up and cause a little bit of trouble and it is in Private Casebook that he ties them all together. Dini also reveals the identity of the new Ventriloquist and when he does so, every story in this book interconnects. Most notably, the story about Bruce's playboy friend, Matthew Atkins - a drunken doppelganger of Bruce Wayne, who Bruce solved the murder of in the previous volume. Both Atkins and the Ventriloquist touch the lives of everyone involved in Dini's run, Zatanna, the Riddler, Penguin, Harley Quinn and more. And this book allows us to view the grand tapestry that Dini had only been weaving in the previous volumes.

What I also enjoyed about this book was how Dini allowed the reader a chance to solve the mysteries, harkening back to the Silver Age of Batman comics. In all of the chapters, we are offered glimpses at who the suspects could be before being showed the true criminal. It also fun to see that when Batman and the Riddler join forces, we are allowed to interpret the unspoken clues. My favourite moment here is when Bruce uses sign language to communicate with Zatanna, just before he is kidnapped and if the reader catches that little moment, then they are offered a clue to how Bruce is going to be rescued. Of course, it does go without saying that these are the detective moments in a title named Detective Comics, but I found it a really entertaining change from the rushed stories we are being given today.

However, what is really interesting is that there aren't really any villains in any of Dini's books. Both the Riddler and Harley Quinn reform, including a classic moment between the Riddler and Penguin where the Penguin talks about 'going straight'. The real villains in this book are the ones who turn up, like Vox and Gotham Jack, who Dini uses only long enough to keep the stories interesting. But he doesn't use them enough to steal the focus of the story. There is a kind of ironic sense that this is the end of Batman's rogue gallery given that the story going on at the time was Batman RIP. Not only would Batman be replaced, but the majority of his rogues would retire with him.

For many people, the real draw of this book will be the conclusion to the Ra's Al Ghul crossover. For me, this part of the book didn't really add anything that particular story. Batman uses his detective skills to psychoanalyse how Ra's resurrection will change his motives, but the resulting battle lacks that something which their confrontations had previously. The real surprise with this story is what happens to Ra's, but I'm not entirely sure that this alone is worth the price of admission.

I enjoyed the ambition behind many of Dini's stories. They may not hold as much interest to fans as Grant Morrison's run does. It instead feels like Kurt Busiek's run on Superman, something which was overshadowed by what came before and after. If this book achieves anything it manages to cement Dini in the Batman universe for what he was trying to achieve...