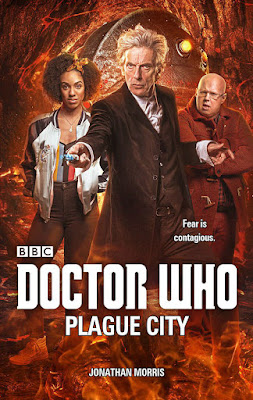 It's Edinburgh in 1645 and the city in the grip of the worst plague in all of history. But there is far more to fear in this city than the bite of a rat's flees. The dead are returning to haunt their terrified relatives, the mysterious Night Doctor comes to those who won't live to see the another day and then three strangers turn up. The Doctor, Bill and Nardole find themselves discovering the secrets of these strange ghosts while trying to avoid the grip of the Bubonic Plague.

Plague City is a very apt title in historical terms for this story. Set in Edinburgh in 1645, the city is the in the grip of the bubonic plague and is the worst thing to ever happen to the city's population, with well over half of them succumbing to the illness. Written by Jonathan Morris who occasionally contributes to the comic strip in Doctor Who Magazine and wrote the Fourth Doctor novel, Festival of Death, Morris seems to spend much of his time here stretching his writing muscles with phonetic Scottish Dialogue and while this can seem like a bit much at times, (I was constantly having to go back over sentences and re-reading them to understand what they were saying), but once you get to used to this little factor, it adds a sense of authenticity to the proceedings.

Morris's description of the squalid capital city at the time is spot on. He effortlessly evokes a small hellhole with twisting streets and damp conditions and somewhere with little hope of salvation. It isn't also the most obvious location for a Doctor Who story which adds to its appeal. The Night Doctor is also well devised with his beaky mask, coat and tricorn hat, who comes to visit the dying. And the ghosts are clearly drawn from the same kind of cloth as the Gelth and the Carrionites, ghostly beings who are dying to reveal their secrets.

But where the book isn't very strong is in its characterisations of the two new companions, Bill and Nardole. Of course, you have to make exceptions for this, there was very little to go on for the writers when creating these novels, the new series hadn't even finished filming at the time of writing. So it is very unfortunate that the Bill that Pearl Mackie has brought to life is so very removed from the Bill in these pages.

Nardole is also a lot more straight forward than his television counterpart and while this isn't in any way a dig at Morris's writing, it just makes it obvious that there wasn't much to go from. The rest of this book is sharp and pacey. In fact it would be interesting to see Morris getting another chance to write for Bill and Nardole now that several episodes are under our belts.

But overall this is a dark and bleak look at the worst thing to happen to Edinburgh and shows us that death comes in many guises and is the perfect book for Doctor Who fans who are looking for something a little more macabre...