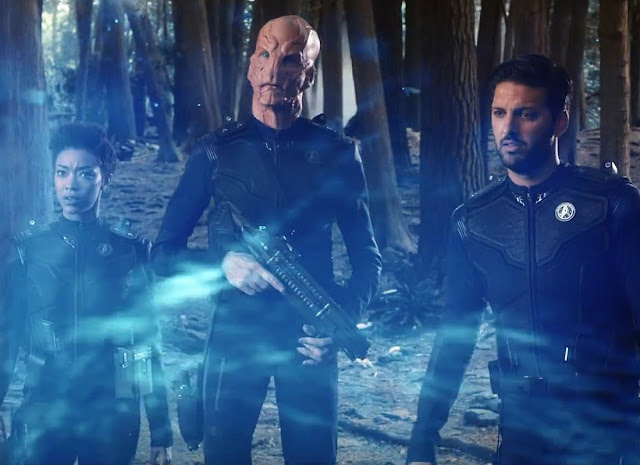 Si Vis Pacem, Para Bellum sees Ash, Burnham and Saru travel to the mysterious planet of Pavo while on board the Klingon ship of the dead, L'Rell continues to interogate her Starfleet prisoner.

Coming down off the high of the previous episode was always going to be a hard job and that is felt a little in this adventure. But only a little.

This episode continued the seasons' improval overall and what I really liked is that it is finally starting to feel like the ensamble cast that Star Trek should have. For a while it felt like the Michael Burnham show. But this is all down to personal preference, having been a Star Trek fan for years, I like the ensamble of the cast and it came as a bit of a shock when that wasn't happening in the opening episodes.

As the show has gone on and the main characters have all fallen into place, the whole thing has begun to branch off and everything seems to be coming together. Even if they have killed characters you'd expect to stay on. Albeit the ensamble cast are headed by Burnham. In this episode we see something of a split-narrative way of telling the story, something used a lot in ensamble storytelling. One with Tilly and Staments and one with Burnham, Saru and Ash. And I was glad to see that the two didn't have anything to do with one another!

With the last episode being a welcome break from the overall plot, this one is firing the plot on all cylinders, so the viewer's enjoyment of it really does depend on how they feel about the season arc. Two of the three strands interest me but one less so.

My favourite plot thread of this episode was the smallest one involving Tilly and Staments. These two are a couple of my favourite characters from the show, Staments is the kind of character that is spikey but you warm too and Tilly is just really lovely. I've also been really interested in what the Spore Drive has been doing to Staments, personally, I think he has been creating the mirror universe all this time without knowing it. I wil be interested to see where it is going.

Also a particular highlight of this episode was the interactions between L'Rell and Cornwell. I think that Admiral Cornwell is a brilliant character and her screaming at L'Rell in defiance was brilliant. But I did feel a little cheated by the conclusion of this arc at the end of the episode. I kept expecting the Admiral to be alive afterall and that everything that happened in between had been one big plot for the pair to escape the Klingon ship. And this might still be the case but the level of uncertainty around her "death", especially one of the more significant characters, was a bit irritating to me. It didn't feel exciting to me, just irritating that it was left undecided in the cliff-hanger.

My least favourite part of this episode was practically everything that happened on Pavo. Maybe it was because the whole thing looked like something out of Avatar but I enjoyed the character work done with Saru and Michael butting heads with someone in charge yet again. But overall, these scenes just did nothing for me and once more, the real consequencies of everyone's actions remained unexplored for next time.

While this episode wasn't as strong as the previous one, it was a solid episode nonetheless. Discovery is finally starting to feel like it belongs in the Star Trek universe and for a fan of the old-school Trek, that is high praise indeed...