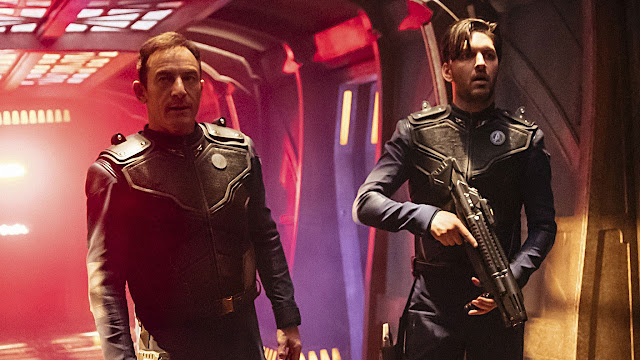 Now, I'm going to be perfectly honest about this, I'm not sure how I feel about Michael Burnham being Spock's half-sister.

Spock always has been and justifiably so, one of the most popular characters not only from the Star Trek franchise but the Original Series as well. Many of the following series' tried to bring back Spock, his family or legacy back into their fold and it didn't always work, his inclusion in The Next Generation excluded of course, they did it perfectly. Perhaps Discovery would have worked a lot better in its early days if it had been set in a different time period and not ten years before Kirk.

Having said that, I love James Frain and Mia Kirshner as Sarek and Amanda, the pair fit each other perfectly. I've enjoyed Frain's appearences as Sarek from the beginning, he captures perfectly what the late-Mark Lenard had that made him such a memorable character. I have always wanted to know more about Sarek and Amanda's relationship, how does something like that between a human and Vulcan work? Voila, Discovery seems to be answering that very question. The main bulk of the Vulcan action takes place on Burnham's graduation day and we see the human/Vulcan parental conflict in full swing.

While the producers are showing us the human/Vulcan duel-personality traits in Burnham, it does feel a little weird including the Katra thing, a major plot point from the movies, The Wrath of Khan, The Search for Spock and The Voyage Home. Here it is explained by Burnham having been attacked by Logic Extremists and her being dead for three minutes, Sarak gave her part of his Katra as a soul-graft. Perhaps though this is because Spock never had anything like this from his father, having to mind-meld with Picard when Sarek died, so the writers are giving Burnham something relationship-wise that Spock never had.

Michael finds herself rejected from the Vulcan Science Academy, something that is a massive failure to her. Only then she finds out that she wasn't, Sarek had to choose between her and Spock and he chose his son. It all backfires in Sarek's face when Spock leaves the academy and joins Starfleet. Apparently, this is Sarek's biggest regret and this is why she keeps on getting flashbacks to it when Sarek is dying. It is nice that Burnham gets the last word by calling him father. She knows who is in her life even if Sarek can't bring himself to say the words, she can say them for him.

I am also enjoying Jayne Brooke's Admiral Cornwell, who over the last few episodes is coming away as more than another disposable character. In this episode, she turns up in person and is discovered to be a counseler who was given to Lorca following what happened with his previous command. She is worried about his mental state, so why would she give him another ship and then rekindle their relationship and sleep with him? Not that I am objected to sex in Star Trek, following years where it wasn't even so much as refered too, it is about time it turned up.

I honestly felt for a moment that Lorca was going to kill her when she told him she would take his command away. Then when Cornwell replaces Sarek on a diplomatic mission with the Klingons and is captured, one has to wonder if Lorca knew it was going to happen. That would be pretty cold if its true.

I am both disturbed and intriqued by Lorca, who is certainly going where no captain has been before. And I am glad they are giving Jason Issacs some meaty material to work with.

At the end of this jam-packed episode, Lorca offers Michael the role of science advisor. I'm glad it took several episodes for her to get the position, it wouldn't have been believable if she had done it sooner. Its a good thing that the Admiral wasn't around to stop all of this craziness.