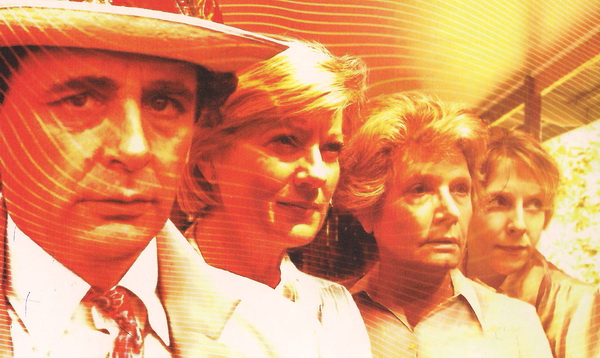 Kenya in the 1950s was not a safe place to be. And it certaintly wasn't safe to be a group of women hiding in an abandoned farmhouse during the Mau Mau uprising, hoping to escape the violence when the British army arrive to restore order. But one of these women is Doctor Elizabeth Klein and she regognises a strange little man in a white linen jacket and a red umbrella when he arrives at their door. She and the Seventh Doctor share a history, during the events of the story, Colditz, the Doctor erased her timeline and left her stranded in 1944, in a history that wasn't her own. But their present meeting proved to be just as memorable as the people in the makeshift home start to be killed off, accompanied by the sound of a thousand, tiny wings.

Author, Andy Lane does a terrific job of creating characters who embody the best and worst that humanity has to offer, none of them are fully good, but none are fully evil, Klein included. Most notable though is Mrs. Sylvia O'Donnell, played brilliantly by Ann Bell, who is impossible to dislike despite her views on race and imperialism.

Elizabeth Klein is a really interesting character. In a world of one-dimensional Nazi characters, she is a rational woman who wants things that rational people want. She wants law and order, scientific advancements and most importantly, trains that run on time. Her belief that facism is the only way to accomplish things and the way she justifies her actions are unsettling to the listener but her interactions with the anarchist Doctor are just riviting. To find this level of philosophical give and take in a Doctor Who story makes for some fantastic story-telling and something that is very welcome.

If the script for A Thousand Tiny Wings falls down, it is in its slightly-heavy handed mirroring of the Mau Mau uprising and the winged menace in the jungle who is picking the small group of women off one by one. But given that listeners will be listening to this with the intention of being entertained, not with the air of a literary critic, this is a small point in the grand schemes of things.

When it comes down to entertainment, A Thousand Tiny Wings is one of the best Big Finish releases I've ever heard. It's well written, well acted and well designed. But it will keep you interested in every way possible...