Doctor Who: The Silurian Candidate - Review 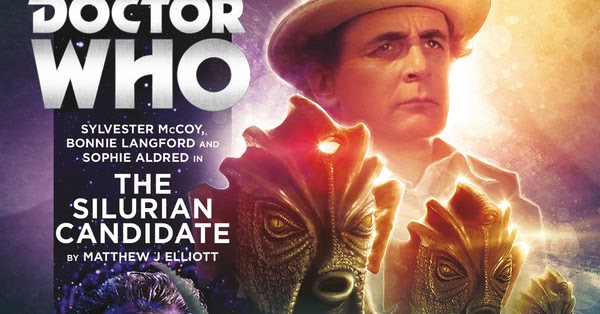 People should be careful what they wish for. A lot of listeners have been complaining about the trilogy of stories featuring the Seventh Doctor, Ace and Mel and with The Silurian Candidate, they are perfectly right too. Ace has had no continuation of her character development and the writers have attempted to do nothing with Mel, leaving them just as under-developed as they were on television. Author, Matthew J. Elliot tries to engage with these characters but he falls completely short because the story is written so incompetently.

I'm sure that the Seventh Doctor can't be an easy character to write for. Especially when a story sees him in one of his enigmatic moods. But I guess, if you ever need a guide for how not to write him, this story is it. He is capritious, manipulative and completely uncaring. When the Doctor manipulates his companions he only does it for a couple of reasons. He does it to accomplish a greater goal or he does it because he thinks its in their best interests. When this is done right, it leads to some great drama. Look at Hex in Death in the Family or Ace in Love and War. But he is forgiven because the audience know he is doing it for the greater good. In The Silurian Candidate, he refuses to tell Mel anything and only goes so far as to tell Ace that he is giving them the Earth. He is being vague for no reason whatsoever. In no way does it advance his plan nor does it trick either Mel or Ace into helping him. There is a point in this story where Ace locks him in a cupboard because of what he has done and she is more than right too. The Doctor is nothing but an arse in this story.

Of course, we also have the Silurian plot going on too. This means it is now Matthew J. Elliots chance to make the same crucial mistake with the Silurians since their conception. He makes them genocidal maniacs. The fundimental conflict in their stories should be that they are the different sides to our nature. The Silurians are meant to mirror humanities own attitudes, some are advocates for a peaceful co-existance, while some are racial extremists. But if humans can live together then so should humans and Silurians. But in stories like this one, from the moment we meet them, they are planning mass genocide. Alright, so they eventually see the error of their ways by the end of the tale but the lack of an unsympathetic voice for them makes them unsympathetic. So far, every single time they have woken up, the Silurians have tried to commit genocide, so why does the Doctor keep taking their side? Ace even points this out at certain points but her complaints come to naught. Really, the lesson here is when your own script doesn't make a scrap of sense, you should take it away and continue to work on it.

Even looking at this story away from the characters and the plot, the script completely falls apart at the fundemental level. The tone is laughably inconsistant, veering from a laugh out loud comedy to heavy emotional scenes with nothing in the middle to balance these two things out. Chairman Falco is obviously supposed to be a Donald Trump allegory, written with the same level of subtly as a baseball bat to the teeth. And if that isn't enough on its own, actior, Nicholas Asbury plays him as a comedy Austrialian. At one moment, Mel is left to reflect at what her role is on this particular TARDIS crew. Perhaps she is there to show the Doctor and Ace the human perspective they have lost over the years. That makes sense but events conspire to make her not prove that and this hasn't been the reason why she has been in stories in the past, so why even bring the point up?

I'm not going to go on with my other points, there are so many, so we'll wrap up with the shocking production, which is very poor for such a company as Big Finish. The direction from Ken Bentley is fine but the music from Luke Pietnik is just embarrassing. There is no sense of place, no perception of where the characters are supposed to be and all the action sequences are incomprehensible. The dinosaur attack is particularly bad with only the characters shouting allowing us to understand what is actually happening!

The only saving grace for The Silurian Candidate is that it aspires to great ideas. It takes a long look at the Seventh Doctor, Mel and Ace and looks at where they are at this point in their lives. Otherwise, there are no reedeeming factors for this story. The Silurian Candidate doesn't even do dull and unambitious with some spunk. It meerly wishes to be dull and unambitious...