Doctor Who: The Highest Science - Review 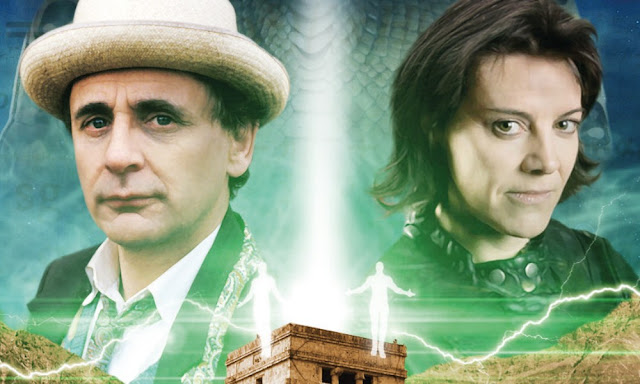 Following the success of 2012s Love and War adaptation, 2014 saw Big Finish begin to bring out new adaptations, beginning with The Highest Science. In the virgin New Adventures range, this was the third novel to feature Bernice Summerfield and like the adaptations of The Romance of Crime, The English Way of Death and The Well Mannered War, this was originally written by Gareth Roberts and adapted by Jacqueline Raynor.

However, The Highest Science pales in comparison to those other releases. Love and War worked because of its character work and emotional depth. The Highest Science doesn't rely on any of those things. The Doctor and Bernice are just ciphers, either quipping or just being pushed along by events. Even the scenes between the pair don't work as Sylvestor McCoy seems like he hasn't even seen the script before and Lisa Bowerman feels like she is overdoing the whole thing. Not that there is much for Bowerman to grab onto here. I did enjoy the Seventh Doctor's diplomacy scene but that is just one occassion in a two-hour play.

That could have been okay, but I didn't like The English Way of Death for its deep emotional content and development of series themes. But at least those plays were funny, this isn't. It is hard for me to explain but the paper-thin characters really aggrivated me. Sheldecker is supposed to be the most evil man in the universe, but he never convinces you that he is anything other than another generic baddie. The Chelonians were very entertaining in The Well Mannered War, but here they are stupid in scenes that go on for far too long. It was like the writers and producers thought that thick = funny and the idea of men giving birth = absolutely uproarious. The Fourth Doctor stories from Roberts were funny. None of this is.

Those Fourth Doctor novels were also plotted very well. The Highest Science is just all over the place with an archeological mystery justling for attention against a war between Chelonians and some well armed train passengers. Throw in a 'master' criminal and his pet brain and you think you had a good story, Doctor Who thrives on interesting juxtapostions, but these two plots just don't work together, each feels like a distraction from the other which means the whole piece feels under-developed. And then you get to the end which is a complete letdown and tonal mismatch which leaves you in complete disbelief that this is how it is all going to end.

The real tragedy of The Highest Science isn't the paper-thin characters or the silly plots. But given the amount of talent who were working on this piece, it still comes out completely disapointing...