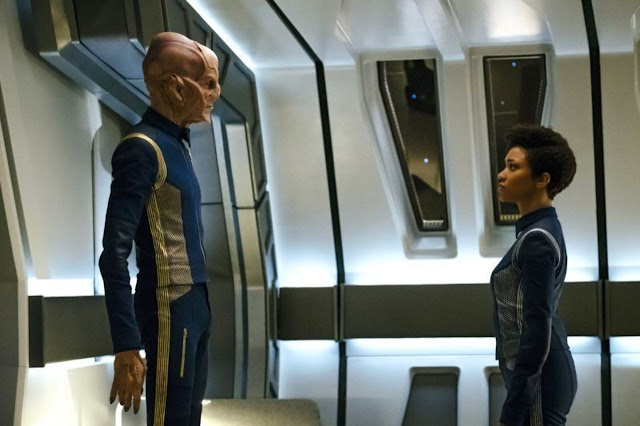 Captain Lorca gets captured and Michael Burnham and Staments have trouble getting the spore drive working, those troubles plague the crew of the Discovery in Choose Your Pain.

I've really enjoyed every single episode of Discovery so far. It is exciting, beautifully made and character driven. My only problem with the show is that it doesn't feel like Star Trek. It follows a arc-driven plot rather than individual episodes. And there is still a place in television for that type of storytelling, it allows you to follow a particular character using the large ensemble and it can still tell darker stories, both literally and metaphorically.

Dealing with difficult topics is an important and neccessary part of what Star Trek is. But in the past series', Star Trek has always been aspirational. All the characters are more noble than normal humans, they make a lot of better choices and have brilliant decisions to get them out of trouble. But in Discovery, they make some terrible choices or understandable but morally dubious ones because they have allowed a war to corrupt their morals. While it is certainly true that this does happen in war, it isn't something that happens in Star Trek, not to such an extent at least.

Choose Your Pain feels a lot more like the Star Trek of the past than the previous four episodes. It finally has more of an ensemble feel to it with the storyline following Lorca, Staments, Burnham and Tilly equally. This is certainly the first Star Trek series to have a feeling that anyone could die. This lends tension to anyone other than Burnham who could be in danger. And now a core cast is starting to emerge with a Captain, First Officer, Chief Engineer, Doctor and it is completed by the arrival of Ash Tyler. Stamets even finds the ultimate Star Trek solution to impossible situations in the form of 'self-sacrifice', when he needs to get the spore driving working.

Things are helped in this episode by the way it refers to Star Trek history. We've met Sarek and encounted veiled references to Spock, but the love for the show's history is much more prevelant here. Every single one of Starfleets most decorated Captains is someone we've heard or met before, Robert April from the Animated Series, Matthew Decker from the Original Series, Jonathan Archer from Enterprise and Phillipa Georgiou from Discovery. The plot even references The Next Generation story, Chain of Command in its torture scenes with Lorca.

And then there is the inclusion of Harry Mudd, first seen in Mudd's Women, a con man who everyone seems to love and who was then re-introduced in I, Mudd, which also introduced us to the robot wife of his ex, Stella. Mudd is an interesting character to return to, his appearences in the Original Series where amongst the most modern to audiences at the time, particularly with the way it dealt with how women were being treated. This alone makes him the perfect candidate for an update. He is naturally and dark and twisted character, making him a perfect fit for the Discovery landscape. And this episode takes his character and handles him a lot better than his original appearences ever did. His strange character still lights up any scene he is in but he is treated a lot more seriously. And his appearence here and in the Original Series makes this, Discovery's first crossover episode.

Choose Your Pain might also go a way to explaining why Mudd dislikes Starfleet so much, considering the way Lorca treats him. Lorca is given one of the darkest backstories we've ever seen from a Star Trek captain. Not only did he refuse to go down with his ship, he killed all his crew to save them from the wrath of the Klingons, something I wouldn't wish on anyone. However, even though Kirk did say that Klingons don't take prisoners, but surely this should have been the crew's decision? Over the course of the episode, it feels like Lorca is redeeming himself, breaking himself and Ash out of prison but leaving Mudd behind.

We've had commanders like this in Starfleet before, normally Admirals but we've never seen what it is like to serve under them. I am still torn on whether this is a brilliant new way to take the franchise or if I prefered the idealistic view of the future from the past shows. But I love Burnham, Tilly and Star Trek, so I'll continue to watch, while I continue to hope it finds a little way back to the original Star Trek series' that I love...