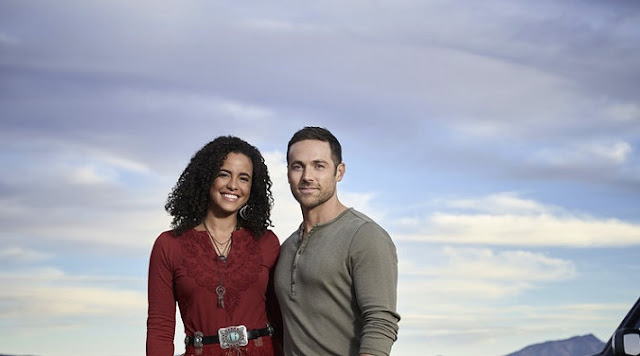 The penultimate episode of Midnight, Texas was all about everyone's favourite jumper-wearing witch, Fiji and the demons on a quest to collect the virgin witch.

What was nice with this episode was seeing that Fiji wasn't always like how she is now. As with most teenagers, Fiji went through something of a metamorphosis when she arrived in Midnight, having burnt down her hospital room! This was arguably the biggest secret she had kept from her fellow townsfolk and friends, she had been commited to an institution because of her powers which were beginning to emerge and she was placed into solitary confinement when she was discovered not taking her meds.

This of course all ended badly for the insitution which found itself burnt to the ground when Fiji finally snapped and destroyed every inch of it. She ends up at her aunt's house and the dark-eye-lined and pin-straight haired Fiji is introduced to us through a series of flashbacks to show us how the powerful witch finally learned to hone her powers.

As with most of her fellow Midnighter's, her past is laced with tragedy and it happens to be one of the darkest yet. Fiji finally falls in love with Jeremy, a boy in town and the pair are about to do the deed, her passion leads to his face melting off. Now we know why Fiji has been pushing Bobo away ever since the pair first shared a kiss.

This episode also gives the problems with the demon Kolkenar, who wants Fiji because older virgin witches are more powerful than younger ones and are rarer and much more powerful. He sends the spirit of Jeremy along with a nasty sand storm, filled with demonic wraiths, in order for him to convice her to go to Kolkenar willingly.

But this act sends all the townspeople flying out of Midnight, after Manfred, the Reverend and Joe fail to find the bones of a shaman who could supposidly help them. The gang end up in the Cartoon Saloon, where Fiji is forced to come clean about everything, including her virginity and leaves everyone, stunned.

While she runs away in humilliation, Manfred decides to get his act together and try to do something. This leads Manfred and Fiji to combine their magicial ways and perform a seriously dark spell which requires a blood sacrifice from someone. Of course, the Reverend offers himself up, because of all the people he has killed in the past but is pushed aside by Mr. Snuggles, who is sick and tired of being an old cat.

Of course, I had my doubts, a network television show couldn't kill a cat, not in the gruesome way that was proposed. And I was right, Manfred dies instead, turning blue.

The thought that she has killed Manfred sends Fiji over the edge and she flees into the storm with Jeremy. What she doesn't know is that this is when Manfred wakes up with information on how to kill Kolkenar.

The penultimate episode was a solid one, almost feeling like a series finale of an old television series, I would have been perfectly happy with season 1 ending with Fiji walking off into the sand-storm, almost like Clark Kent rushing into the tornado after Lana at the end of the first season of Smallville. But it is a great set up for the finale...