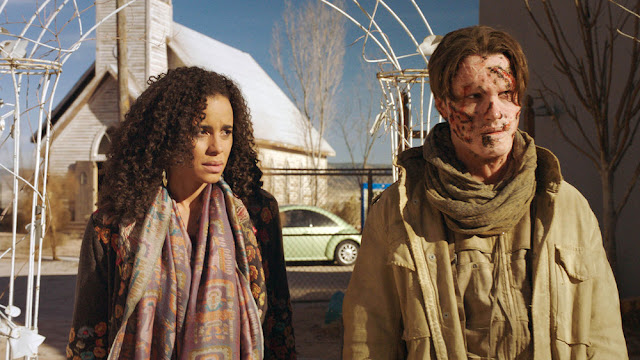 Oh, Fiji, what have you done? Just as the situation for the Midnighters already feels out of control, she makes things just that much worse. No one ever said this would be easy, but this has been an uphill battle already. My hope for this episode was that the producers would crank up the dial and let the floodgates open. And to my suprise, this may or may not have happened.

As the episode opened, you could feel the sense of urgency as Fiji giving in didn't mean the rest of the characters had too. This is just what you would want to see from this group, no matter what they see as the priority at hand. The writers and producers manage to strike a good balance between story and plot development here, with the plot taking much of the priority, just as it should. It didn't really matter what Lem and Olivia were going through when the fate of the world was at stake. From beginning to end, the pace of this episode was brilliant, getting from point A to B perfectly, once all the pieces were in place, it all came down to the execution.

Fighting the demonic wraiths in the town turned out to be pretty cool. It is easier said than done, but it pitched just right, giving the Midnighters a force to face when their backs were to the wall. We've all wanted to see the Midnighters show us what they are capable of and they do it by giving them a force powerful enough to equal them.

When Kolkenar finally arose, I was very impressed with the visual effects. He wasn't as big as I imagined him being but he was imposing enough to make up for his lack of stature. But the final fight with Kolkenar could have been much bigger. The group have pushed and pushed but they rushed through what could have been a great confrontation. What really saves the day is the great lengths Manfred goes to, to save the day.

Given the situation, it was impressive to see Manfred continue to push the limits of his powers. At the beginning of the season, he was only joking that he could properly communicate with the dead. Here though letting several demons inhabit his body. He uses a lot more magic in this episode than Fiji, though that is understandable as she is afraid of what she can do.

How Fiji eventually fights Kolkenar was an okay development, though once she announced she was a virgin witch, I guessed what they were going to do with her. So while this was a good development for her character, surely it was something that the audience could see coming a mile off.

But what really might have ruined this episode for some people was the shocking way the writers and producers dealt with Olivia. For most of the episodes, they have played with the fact that she is hesitant to deal with supernatural forces. Killing other humans doesn't mean much to her but when you pile that on top of the fact that she doesn't want to become a vampire like Lem and surely you've got a worst case scenario. The drama and the knowledge that we knew she and Lem loved each other warmed our hearts. Out of all the couples in Midnight, Texas, they were the ones that I was most invested in and it all payed off at the end. No doubt, if the show gets a second season, it will put Olivia in a brand new chapter.

So the gates of hell weren't exactly brought to the table but everything that led up to Kolkenar was brilliant. The Virgin Texas showed of most of the characters at their glorious best and one does have to wonder what the ending will mean for the future of Midnight. But at the end of the day, you couldn't have asked for a better conclusion to this show's first season. Here's hoping there will be a second...