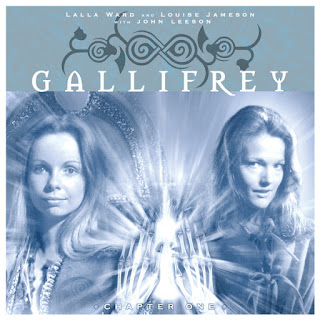 Picking up the threads left by The Apocalypse Element, which did introduce us to Romana being the President of Gallifrey and a shaky union between time-travelling species, this is a political drama really hits the ground running and gives us a good story for each of the major players. The Celestial Intervention Agency, the Monan Host and their allies have formed a union like all the nuclear-capable countries on our world, inspecting and restricting the use of unauthorised time travel.

And naturally, a strange device causes a bit of a flap.

The whole problem is pretty obvious to stop but the amount of backstabbing, political intrigue, diplomacy and brinkmanship easily sets this series up for the several releases that happened over the years. We learn who the Temporal Powers are, we learn about Cardinal Braxiatel support of Romana and Narvin's shiftiness. We see Leela being drawn back into Gallifrey's political shenanigans and we hear both Leela's and Romana's K-9s, serving as exposition devices. We meet Celestial Intervention Agency agent, Torvald and the scoundrel Arkadian. We even get a little cameo from Trial of a Time Lord's Linda Bellingham in her role as Inspector Darkel.

So we meet everyone who is going to be involved somewhere along the line and there isn't a bad performance in the bunch, though I did find some of the voice modulation for the aliens a little distracting.

In an already glorious cast, Lalla Ward dominates proceedings with her performance as Madame President Romanadvoratrelundar. So convincing is she in this role, it is hard to imagine at time when she wasn't the Doctor's companion. There is some extra poignancy knowing that the Doctor won't be around to save them and unlike Dalek Empire, the leading players of this series don't need his help at all. Romana, Leela and K-9 are much better at dealing with this kind of trouble than he would be.

So far, this is the one and only series from the Doctor Who universe set on Gallifrey and this series is worthy of that exalted stage. This really is one of brightest jewels in Big Finish's crown.

So far, Weapon of Choice is the only Gallifrey release that I have listened to. Never fear though, I am looking forward to and slightly terrified at, listening to the rest of the series at some point...