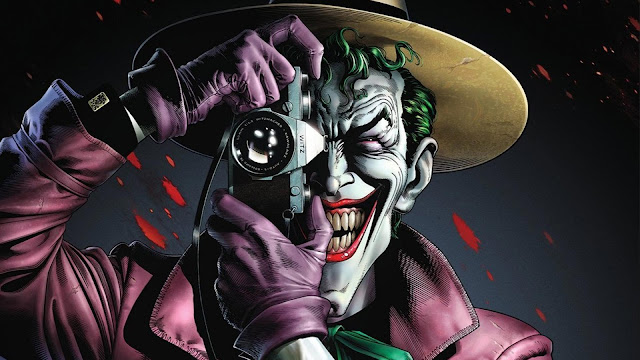 Looking at how many of the DC animated movies are based on pre-existing comic book stories, it was only ever going to be a matter of time before The Killing Joke made an appearence. This adaptation should have been a slam-dunk for DC as it adapted from Alan Moore's graphic novel and it features some key voice actors from the Batman: The Animated Series, in their iconic roles. And The Killing Joke is only the second Batman movie to recieve a R rating, which suggests this is going to be a darker, more visceral Batman movie, more in line with its original source material. However, the movie is bogged down by its desire to veer away from that original source material.

For most of its run time, The Killing Joke is a pretty straight forward adaptation of the graphic novel. And for the most part, it seems happy enough to explore the dark bond between Batman, voiced by Kevin Conroy and the Joker, voiced by Mark Hamill as the prince of crime embarks on the worst thing he has done to date. As the Joker puts it, his mission is to prove a point, anyone can become like him and anyone can turn to crime or lunacy given the right circumstances. And in doing so, he sets his sights on two of Batman's closest friends, Commissioner Gordon and his daughter Barbara - AKA: Batgirl.

So far, the film is pretty good. But the rub is that the book is relatively short and not great fodder for a full movie adaptation. This requires director Sam Lui and writer Brian Azzarello to expand the original work and establish a little extra conflict. The script basically gives us a brand new opening, one that does flesh out the relationship between Batman and Batgirl in this particular animated universe. In theory, it should have been exactly what The Killing Joke needed. But the book is basically a Batman/Joker and it makes a terrible Batgirl story. She is less of a character here and more of a plot device and one who is maimed and degraded by the villain to provide nothing more than motivation to the hero. It sadly doesn't let go of some of the poor superhero storytelling that plagued the comic books in the late 80s and throughout the 90s.

The idea of adapting the book to make Batgirl a more proactive part of the plot should seem like the perfect way to make amends but instead, this is where the movie stumbles greatly. It takes an already troubling depiction of Batgirl and makes it much worse. This is something the movie accomplishes through the use of Batman and Batgirl as lovers as well as a crime-fighting duo.

It may be that there are corners of the DC Animated Universe where a relationship like this makes sense but it isn't even the age difference between the characters that grossed me out. Whatever the age difference between Barbara Gordon and Bruce Wayne is, it is clear that they are both consenting adults, the creepy part is that it is so obvious that Batgirl is subservent to Batman. He is a seasoned veteran and mentor while she is the younger pupil. That Batman would take advantage of a situation like that doesn't put him in a good light as a hero and that is nothing to say of the fact that she is basically the daughter of his best friend and he has been seeing her on the old-sly. This and the Arkham Knight video game is enough to make you wonder what happened to the Dick Grayson/Barbara Gordon romance!

While the romance might be creepy, it would work a hell-of-a-lot better if it actually contributed something to the overall plot. Instead it leads to a dull-as-dishwater plot about Barbara hunting down some bloke while butting heads with Batman at every single turn. Her greatest concern isn't the superheroics but the fact that her costumed boyfriend doesn't pay enough attention to her! She makes terrible decisions in the heat of battle all because she is too distracted by her rubbish love life to think clearly. This isn't the Batgirl that we all know and love but a joke and a bad one at that.

Worst still, none of this opening rubbish as any bearing on the rest of the movie as Batgirl still becomes the sacrificial lamb in the end. Her romance adds nothing to the supposed trauma of it all and nor does it add to the dynamic between Gordon and Batman and why all of sudden Batman has a thing for the Joker. The first thirty minutes could have been cut completely and have had no impact on the rest of it.

The good news is that the remainder of the movie is a faithful adaptation of the book with many of the scenes mirroring key panels in the book. It is a pity though that the animation isn't detailed enough to fully mirror the original artwork but everyone makes the most out of it. Some of the Joker-related imagery is creepy enough to remain in the memory, particularly the horrid grin on the corpses he leaves behind.

A lot of the dialogue is also lifted from the original material, even if some of it sounds weird being spoken rather than read. But that is a problem that plagues all adaptations, though there is great appeal in hearing Conroy and Hamill bringing life to such an iconic book. And they make such a good job of it, it is hard to imagine anyone else reading the lines.

Mark Hamill is particularly impressive as he delivers one of the most well-rounded performances as the Joker of all time. He brings plenty of gleeful and sadistic moments as well as getting to explore more of his saner side, particularly in a pivotal scene where he has to take stock of the direction his life has taken. In these particular scenes, Hamill brings some humanity to the Joker even as the signs of the psychopath is seeping over the margins.

And for her part, Tara Strong does a good performance as Barbara, despite the painfully limiting material. There is an obvious shift in the way she delivers her lines when she is Batgirl to when she becomes a normal person. And it is a real shame that Bob Hastings, the original voice of Gordon, passed away in 2014, it would have been brilliant for him to have onefinal outing with Conroy, Strong and Hamill.

But try as it might, this movie can't shift the the fundamental attraction of the book, the exploration of the doomed relationship between Batman and the Joker. It also shows the prince of crime in a new and intersting light, offer us some moments of sympathy amongst his acts of cruelty. It makes brilliant use of an R rating without having too much violence and sex. And it keeps the same, wonderfully ambigious ending, which works even better with Conroy and Hamill bringing it to life. This is still a brilliant Batman/Joker story, just a terrible Batgirl one...