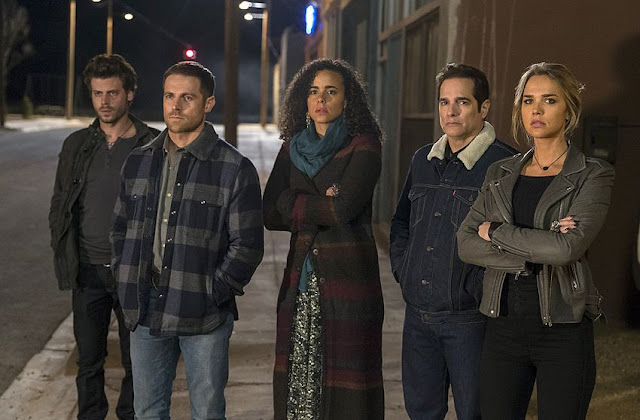 Blinded by the Light sees old storylines getting tied up, last week saw the Peter Lowry storyline wrapped up and saw it get rid of the Sons of Lucifer altogether. Manfred dealt with Hightower which left just a few threads to keep things moving. We still had the question of who killed Aubrey which finally gets answered in this episode. The overall theme of the veil thinning was discussed and mentioned more than ever and now all the characters know what is happening. One of the questions I had for the series is finally answered, what is the dark secret at the heart of Creek's family. I wouldn't have pieced it together from their appearances earlier in the series but it turns out to be a heartbreaker.

Midnight seems to be plagued with hooligans and this episode opens with some grafting over everything, as well as calling Fiji middle-aged, something she denies hotly! They come close to meeting the alter-ego of the reverend as it is a full moon and then they meet Lem in the middle of the street. They speed out of town but leave their friend Aerin behind. She tries to hike out of the town but gets terrorized by a guy driving a truck and there is no shortage of suspects as to who it might be.

The episode seems happy to play heavily with sympathetic characters. Aerin is with the vandals but she doesn't like any of them, much like Bobo in his past. It was nice to see her boyfriend return the next day and while he isn't the most sympathetic characters but he does have the guts to tell her mother. But her mother is a judge and she sends out sheriffs to Midnight to try and find her. But somethings in Midnight are best kept away from normal people. 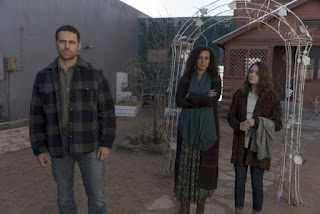 We learn that the Reverend has been keeping secret several complaints from locals in Midnight. Fiji hears the demon growling her name, Lem is growing hungrier and Manfred gets migraines from his psychic connections. There is a dark shadow descending over the town and Jo and the Reverend have to tell the town about the veil. But first the gang have to discover the whereabouts of Aerin.

Creek and Manfred head into the woods where she tells him she saw bruises on her brothers arm and she worries that it might be their dad hurting him. But is it possible to feel any form of sympathy for Mr. Lovell? I'll circle back to that later but her father recently fired Creek from her job at the gas station because of her relationship with Manfred. And he's doubled Connor's shifts. Conner is tired, busy and bruised. Creek and Manfred discover a second body in the woods, it isn't Aerin but Tiffany, the vampire groupie from episode three. She's been dead for a while and her body is in the same condition as Aubrey's was. Bobo thinks they are looking for the same killer.

With two dead girls and plenty of dead animals to account for, the Reverend tells the team his source believes the veil is thinning rapidly. Evil is coming and triggering everyone's darker urges. But by all comparison, this is something that happens to me when I eat too many sour sweets! Lem and Manfred quickly up their game in the search for Aerin, when they discover her, Shawn Lovell is hovering her. Everyone had better grab their pitchforks!

I love that while Lem was interrogating Shawn, Olivia wants to straight-up murder him! Shawn doesn't say anything so Manfred heads over to his house to talk to the dead. They lead him to a hidden compartment where he finds shoebox holding some mementoes from the killings and the killer's infamous and creepy black skull mask. This is where the twist of a lifetime comes into play, the box doesn't belong to Mr. Lovell but his son, Connor. Shawn has been protecting the little psycho the whole time. He had lost their mother and he couldn't bear the thought of his son being institutionalised. There is no question, Connor is the killer and Aerin later identifies him. 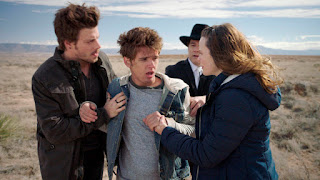 This was a really clever twist, though I guessed it from the moment Connor starts packing up and getting ready to leave. The first two-thirds builds itself up so that we believe it is father who is doing the killing and it is really clever how when Aerin identifies her attacker, it is in a photo of Connor and Shawn no doubt in an attempt to keep the killer's identity a secret till the end!

It turns out Connor had hit her with a metal pipe. She lost consciousness but when she was able too, fought back and hit him over the head with a rock. Things go from bad to worse though when Creek unwittingly gets in the car with Connor and Mr. Lovell has no idea where Connor would take her. This is where things get really interesting. Angel Joe rips his shirt off and sprouts his wings, flying off to find them. I guess you call that an act of public decency.

Gradually through the course of their conversation, Creek starts to pick up little hints that nothing is right with her brother. Connor points out that his victims weren't exactly innocent, Aubrey was a white supremacist and Tiffany wore socks with sandals. Creek manages to get Connor to confess and first, he tries to justify his actions by the thinning of the veil. Then in a chilling turn of events, he confesses that he actually enjoys it.

Eventually Joe uses his divine light to stop the truck and save Creek. I was most surprised when Lem snapped Connor's neck, I was expecting him to run off and then reappear in the later episodes of the series. Maybe he will, this time as a really murderous demon, I guess we'll have to find out. We know that Lem isn't above killing people to save his town but it was still a shock to see him openly kill someone, especially when it is the brother of someone he is close too.

Blinded by the Light was a brilliant episode, the slow build up really pays off in the end and there are some really chilling moments when it comes to the human psyche. Connor's death was a real shock, especially when you think that he was in turn, murdered. I guess he had coming. One thing I was confused about what whether Creek actually knew what had happened or if she thought he had just run away. I guess we'll find out.

Will the knowledge of how her brother died at the hands of Lem, even if he did it for a good cause, send her hurtling for the dark side? I guess we'll have to wait and see...