Doctor Who: The Web Planet - Review 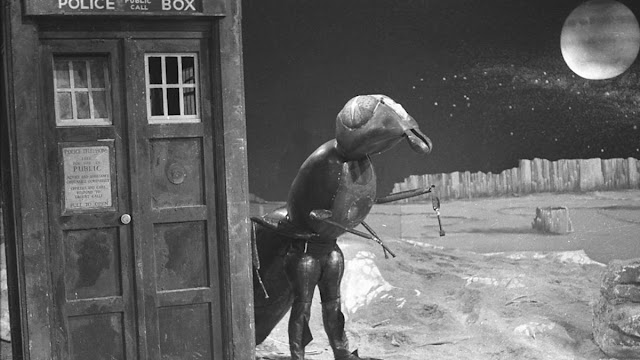 With so many stories from the William Hartnell and Patrick Troughton eras still missing from the BBC archives, you really get the feeling that some of them get shrouded in mystique and a reputation that they don't really deserve. Take for example, Tomb of the Cybermen, which was, while a classic in its own right, considered the holy grail for Doctor Who fans until it was discovered in 1990. And it doesn't really live up to all the hype. It is a cracking good story but it didn't live up to our expectations.

This leads one to wonder what other existing stories from these eras would be considered classics if they were still missing. Perhaps one would be The Krotons. If all that survived of this story was a well shot of a Kroton taken at the right angle, then people with long memories would remember with nostalgia these strange creatures. But perhaps the biggest story that would stand out is indeed, The Web Planet. It is the only story in the show's history set on a completely alien world, with no humaniod characters, bar the regulars, in it. There are giant ants, giant butterfly men who fly around the set, a brilliant alien set with strange camera shots to give it an alien feel. 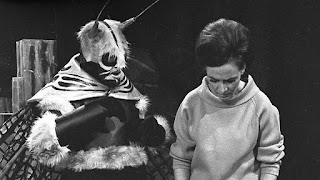 There isn't a doubt in my mind that if this story didn't exist for us to 'enjoy' these days, it would be remembered as a classic. But one look at this story shows you that style doesn't always mean substance.

Following directly on from the conclusion of the previous story, The Romans, the TARDIS has been pulled down to the planet of Vortis, a barren and dead world where acid replaces water and oxygen is in short supply. While the Doctor and Ian go out and investigate this strange world, Barbara is controled by a mysterious force that controls her through the bracelet given to her by Nero. As a result, Vicki is left alone in the TARDIS. But Vicki isn't safe in the TARDIS as a group of Zarbi find it and take it to their base and to a creature called The Carsinome.

Soon the Doctor and Ian are captured by the Zarbi and taken to The Carsinome, where the disembodied voice of the Animus speaks to the Doctor through a headset that decends from the roof. While all of this is going on, Barbara is rescued from walking into a pool of acid by the gang of giant butterflies. But soon both she and her two butterflies are taken prisoner by the Zarbi and their Larvae guns and imprisoned in the mysterious Crater of Needles. While there, they escape and plan to take down the Animus.

Meanwhile, back at the Carsinome, the Animus has instructed the Doctor to find out about the Menoptra Invasion using the TARDIS' astral maps. It turns out that, in truth, Vortis is the planet of the Menoptra. And while this explanation is being given to us, Ian manages to escape and goes to find Barbara, on his way he teams up with the female Menoptra, Vrestin but they too get attacked by Zarbi and end up underground.

While underground, Ian and Vrestin come across the Optera, the wingless decendents of the Menoptra who have lived under the ground and worship Menoptra like gods. 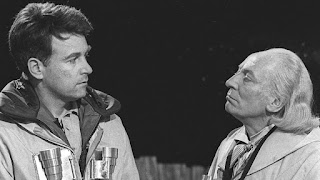 Much like the conclusion of The Dalek Invasion of Earth, all roads lead the characters to one point and all the parties, the Doctor and Vicki, Barbara and the Menoptra, Ian, Vrestin and the Optera decend upon the centre of the Carsinome, where they put a stop to it once and for all.

So that sounds like a good story, right? Well, appearences can be deceptive.

I loved episode 1 of this story, it clearly sets out to be entirely different from anything we have seen before up to this point. This is the first of many times that an outside force interferes with the TARDIS and the first time they land on a planet where the oxygen is in short supply, so they have to wear protective clothing. And for the viewer, there is a real sense that something odd is going on.

We also get to learn more about how the TARDIS works, in these scenes we also get more character development for Vicki. I also liked the scene where Barbara explains that both her and Ian also got to go to Rome, albeit in a little worse for wear way of it. Usually, Doctor Who stories are written in a way where the events of the previous story is virtually forgotten about, I appreciate that it isn't done that way here.

Ian and the Doctor get some good moments and some good comedy, particuarly when the Doctor thinks Ian has done a magic trick with his gold pen. And there is more uncertainty for the viewer with the strange effect on the camera lense and the way their voices echo.

And the first episode has a terrific cliff-hanger as it isn't made obvious that it is the Zarbi who has taken it. It looks like Vicki has taken off without her companions, so this is probably the first time the viewer shared the same amount of shock at the event.

While the description of the plot may sound exciting, I suspect what makes it so is the concept behind it. Giant ants, giant butterflies, a disembodied voice, pools of acid, an alien world with no humanoid-supporting characters at all. However, if you were to use soldiers instead of ants, the young band of rebels instead of Menoptra, and replace the voice of the Animus with a fat bloke in charge of an Earth colony and who barks orders at the Doctor, then you have another one of the many bland stories out there, just stretched to six episodes instead of four. 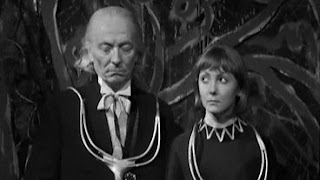 And six episodes for this story is just far too long. Apart from Ian and Vrestin meeting the Optera, everything in my summary happens in the first three episodes. The first three episodes work brilliantly, but it all goes down hill from episode four onwards. From then on we are subjected to scenes with Ian and Vrestin talking to the Optera, the Doctor talking to the Animus, Vicki being put into trances with a weird collar/wishbone thing and Barbara and the Menoptra standing around saying they need to do something.

This is a story I've seen a couple of times and I can fairly say that I don't see how the plot advances through episodes, four, five and six. The only thing I really remember is the Menoptra cringingly shouting "ZARRRRRRRRRR-BBBBBBBBBBBBBBB-IIIIIIIIIIIIIIIIIII!" And then acting like matadors.

It would have worked so much better if the final three episodes had been condensed into one. This had worked with Planet of Giants. But as they didn't, we are left with an episode hanging on a gimmick which isn't strong or interesting enough to support six episodes. And the whole thing suffers as a result.

It is true when people say that people say that The Web Planet is a brave story. The production side of Doctor Who have really gone all in with it. Setting it on a completely alien world with no humaniod side-characters and from an artistic point of view, the whole thing works. The first thing they do to portray this alien world is so different and achieved so easily that it is suprising that it works. It takes a while a while to get used to the strange effect over the film but once you're in, it's alright. Especially for a 1960s attempt at creating a completely alien world.

One magical moment in this story is where a Zarbi runs right into the camera and you get a rare look at the lighting grid above the set. Truely brilliant!

But there is very little to recommend about The Web Planet. Sure, some fans like it but I just don't. Only the first three episodes contribute anything to the plot, beyond being a cure for insomina and the rest is just so dull and unbelievable. But despite everything, I'd be willing to bet my bottom-dollar, that if this story was missing, this story would be considered a true classic...